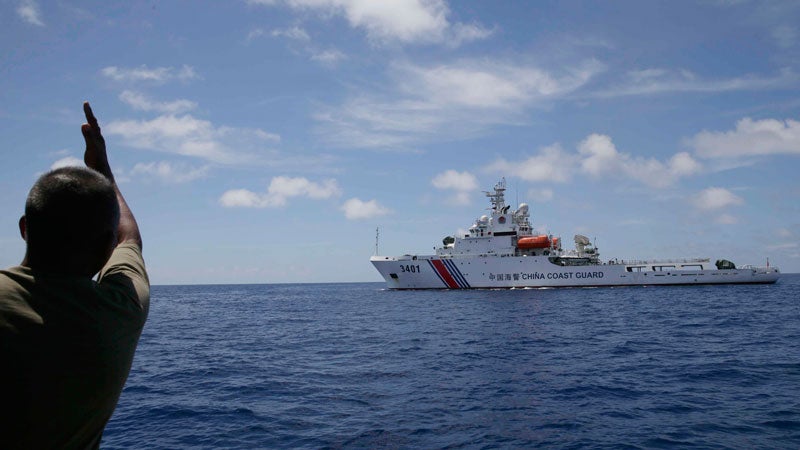 Deogenes Corseles, 36, said the latest incident of Chinese aggression toward Filipino fishermen happened about 2 p.m. on April 9, when the Chinese vessel used a water cannon to drive away at least 80 fishermen from Panatag Shoal (Scarborough Shoal).

Some of the fishermen, who were mostly from the provinces of Bataan, Zambales and Pangasinan, arrived in this town on Friday to sell their catch at a local fish port after spending a week near the shoal, which China claims is part of its territory in the South China Sea.

Corseles told the Inquirer on Saturday that one of his companions fell off his boat and was hurt.

The shoal, also called Bajo de Masinloc, is located 230 kilometers from Masinloc town in Zambales. It used to be a free zone for local fishermen until the Chinese seized it in 2012.

Corseles said personnel from the Chinese ship used a megaphone to warn the fishermen and played a recorded message in English asking them to leave.

“The Chinese vessel was about 150 meters from our boats when its personnel fired a water cannon. One of us fell off the boat and sustained injuries,” he said.

Corseles said most of the Filipino fishermen, who were in eight boats, were hit by water sprayed by the Chinese vessel. He said they immediately left the shoal, but returned the following day.

“Two of the Chinese coast guard personnel held guns that were pointed at our direction. They also took some of our fresh catch and cut off our nylon anchor lines,” Barrios said.

This happened more than a year after a group of fishermen from Pangasinan and Zambales reported that Chinese vessels fired water cannon at their boats while these were anchored at Panatag Shoal.

In January, a Chinese patrol ship rammed three boats carrying 29 Filipino fishermen at the shoal. No one was hurt in that incident.