Immigrant advocates explaining the benefits of US citizenship. NAM PHOTO 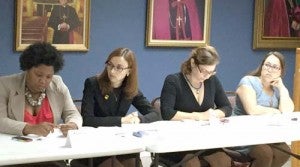 Immigrant advocates explaining the benefits of US citizenship. NAM PHOTO

MIAMI, Florida — Sarai Portillo, 35, never planned on becoming a U.S. citizen. She thought having a green card was enough for her to remain secure in the country.

“I used to tell my husband that we are not staying here long-term,” she said. “The path to citizenship was just not in our minds.”

But when she would return from visits to see her family in Mexico, Portillo routinely found herself in secondary screenings at U.S. airports. Agents would take her fingerprints and then lead her to another room where she would be asked more detailed questions.

Portillo didn’t know why she got singled out, thinking maybe it had something to do with a past driving ticket she got while living in Portland, Ore.

But being put through the screenings, she said, made her feel like she was being treated “like a criminal.”

“I didn’t know that [with a green card], you could still be refused [re-entry into the United States]. It was frustrating and scary,” Portillo said at an ethnic media news briefing last week in Miami.

An immigration lawyer advised her that the only way to avoid the possibility of getting denied re-entry or, in a few cases, even being put in removal proceedings, was to get naturalized. With the help of a legal caseworker, she became a U.S. citizen in 2013.

Now she is able to travel freely, spend more than six months outside the country, and not worry about the possibility that she might not be let back in.

Portillo, who spoke to over a dozen reporters at a news briefing organized by New America Media, encouraged other immigrants to take the step to become citizens. The meeting was part of the New Americans Campaign, a national initiative to encourage eligible Legal Permanent Residents to apply for citizenship in Miami and other cities across the country.

Last year, however, only about eight percent of eligible immigrants applied for citizenship. Some, like Portillo, don’t apply for naturalization because they mistakenly think having a green card has the same benefits as being a U.S. citizen.

Others hold back for other reasons, including not being able to afford the $680 application fee or being worried about passing the citizenship test in English.

In response to these challenges, citizenship advocates in the Miami area say that “there is no such thing as a dead-end street” in the application process.

They offer free legal services to guide the applicants from start to finish — from assessing their cases, filling out the forms and making sure the information is complete and accurate, to learning English, preparing for the test and assisting them during the actual interview.

“We’re helping people not only [on] the legal side, but we want them to get a full picture of becoming a U.S. citizen,” said Evgeniya Nechyparenka, an immigration caseworker at the International Rescue Committee-Miami. “When you become a citizen of this country, you benefit the community and the community benefits from you.”

According to Maria Rodriguez, executive director of Florida Immigrant Coalition, South Florida is among the zip codes with the lowest incomes in the country. Many residents here are eligible for the government’s fee waiver program when they apply for citizenship — but they aren’t aware that it exists.

“I know that if you have two or three children, the fees can add up,” Rodriguez said. “Based on your income, you may qualify for a fee waiver.”

Fabiola Valencia, who just got her U.S. citizenship two weeks ago, took advantage of the fee waiver program. Her job working part-time in a store wasn’t enough for her to support herself and her parents.

“When they asked me why I am applying for a fee waiver, I told them that I have been on food stamps,”  said the native of Peru. “It wasn’t that difficult.”

Today, she says, it is “a privilege to be a citizen and live a good life. It gives me pride,” said Valencia, adding, “I can now petition my parents.”

Krystina Francois, citizenship coordinator for the Catholic Legal Services in Miami, says that, economically, the government gains more when immigrants become citizens and get higher-paying jobs. A study found that the income of a newly naturalized citizen increases by 10 percent.

“As long as you are consistent with what you put in your citizenship application, you have nothing to be scared about,” Francois said. “They (immigration officers who interview applicants for citizenship) are actually very friendly — as compared to those handling other immigration applications — and they actually want you to become U.S. citizens.”

But many, like Portillo, simply aren’t aware of the benefits that separate U.S. citizens from legal permanent residents.

Not aware of benefits

Rodriguez noted that among Caribbeans in South Florida, Jamaicans have the highest naturalization rate — partly because of their proficiency in English and their plan to live in the United States for good.

Canadian immigrants, on the other hand, have the lowest naturalization rate in South Florida, she said.

“It’s just mainly [Jamaicans’] ability to speak English,” she said, “and, for Canadians, they think there’s no need to become U.S. citizens because they can easily go back and forth between the U.S. and Canada.”

Rose Coriolan, station manager of Haitian radio WSRF 1580 AM, said some Haitian immigrants are hesitant about naturalizing because they are worried they might not pass the test due to their limited English proficiency. Others don’t plan to stay for a long time in the United States, she said.

“But that is now changing,” Coriolan said. “Many Haitians are now realizing the benefits of being a U.S. citizen. Because they have children who are born here, they also want to stay during their retirement.”

For Sarai Portillo, U.S. citizenship has been a life-changing experience. She can now travel freely, and has future plans to bring her parents to live in the United States with her and her husband.

“I felt very much relieved,” Portillo said. “Now I can truly say that I can stay in this country as long as I want to.”

For more information about the New Americans Campaign, go to www.newamericanscampaign.org.