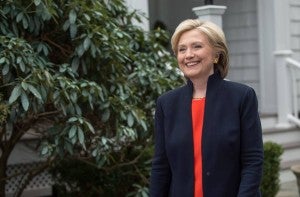 SAN FRANCISCO — “Americans have fought their way back from tough economic times, but the deck is still stacked in favor of those at the top,” said Hillary Rodham Clinton as she hit the road to Iowa on April 12 and made her 2016 White House bid official.

“Everyday Americans need a champion, and I want to be that champion so you can do more than just get by,” the former secretary of state said in her two-minute campaign video that premiered on her website: hillaryclinton.com last Sunday.

In the Filipino American community, most leaders reached for comment by Manila Mail were quick to express support for the former first lady and senator.

“It was something everyone knew was coming,” Broadway diva Lea Salonga said about the big announcement.

“I wholeheartedly will campaign for her to become the first woman president of the United States of America,” declared Loida Nicolas Lewis, founder of U.S. Pinoys for Good Governance, a staunch supporter of the former first lady.

Lewis was a key player in Clinton’s presidential bid in 2008. According to Lewis, Clinton is the most qualified and most experienced of all current candidates.

California Assemblymember Rob Bonta (Dem.-Alameda) said he is ready for Hillary: “I am excited and inspired that Hillary Clinton is running for president of the United States, and I am proud to support her. Clinton’s priorities and values are consistent with the core values of President Obama and the Democratic Party, as well as my own. I am particularly impressed that she shares my passion for quality, accessible early childhood education for all, regardless of socioeconomic background. She will be a great champion for all Americans.”

For Esther Chavez, president of the Philippine American Press Club, supporting Hillary is going to be worth it “even though my husband is a Republican.”

“Hillary has character and experience. I believe she can lead our country. She’s a role model to many women. I just cannot be passionate about her on the dinner table, but I will definitely be supporting her,” Chavez stated.

Filipina Women’s Network founder, Marily Mondejar, could not agree more. “I’m excited with the possibility of seeing a woman president in my lifetime. She’s demonstrating what to do when you fail. That failure is another opportunity to reinvent yourself—you pick up the pieces, dust yourself and move on to the next challenge. Her candidacy opens Filipina women’s imagination that you can reach for any position you want even if it takes several attempts. And at any age.”

In New York, Philippine Consul General Mario de Leon stressed the importance of Fil-Am civic engagement:  “2016 will be an important year for all of us, as it is an election year both in the Philippines and the U.S. Hillary Clinton is well known to Filipino Americans from different sectors of the community, not to mention she has already made a visit to the Philippines during her term as secretary of state.”

The consulate, de Leon said, “will closely monitor political developments and support a robust and participative U.S. electoral process and encourage Filipino-Americans who are eligible to vote to exercise their right to elect leaders who will enhance bilateral relations and promote the interests of the Filipinos in the U.S.”

Lawyer J.T. Mallonga, current national chair of the National Federation of Filipino American Associations and a registered independent voter in New Jersey, said his position is to endorse the candidate that will support immigration reform.

“Hillary has always championed immigration among others, he said. “I am confident that the Democratic Party will endorse her. And if she wins the election, she can initiate the immigration reform.”

“I am not going to support her,” he said. “She would be a failure in governance. She was never a governor of any state. She’s basically a legislator and lawyer. She must know how to improve the economic condition of the country. That should be one of the qualifications to become president of the United States. She must know how to lift people from poverty. She is a candidate with no experience in government.”

According to Asercion, Clinton is intelligent but tends to rub people the wrong way. Asercion, a 73-year-old U.S. Navy veteran discredits Clinton because of her “secretive ways.”

“Hillary is very secretive and it’s very difficult to trust what you cannot verify. She wants her servers cleaned so that nobody could get access to the contents of her emails. The reason why people do that is because they don’t want people to know whatever it is that they want to hide. Hillary is so secretive and quite frankly, her political ambition trumps everything else including honesty and being open to the public that she wants to serve—and that’s going to give her a lot of headaches because sooner or later, it will come out.”

Asercion was also unhappy with Clinton’s performance during her tenure as secretary of state. “She failed miserably at [the] Benghazi attack because that’s one of the key points that she’s trying to hide. She blew it, defending the embassy there resulting in the death of the ambassador.

Asercion also accused Clinton of allowing China “to start the reclamation project in the Philippines and didn’t say anything or do anything to stop it. She didn’t even make a comment about the Chinese infringing on the Philippine sovereignty, and the Philippines is a very important ally of the United States. She really didn’t accomplish much during her tenure as secretary of state. She traveled a lot and raised a lot of money for the Clinton Foundation from rich Arabs in Western countries. As a whole, there was really nothing of importance that she accomplished.”