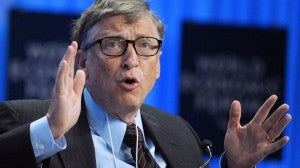 Immigration sources said on Wednesday that William Henry Gates and his wife, Melinda, are scheduled to fly back home around 2 p.m. on Thursday aboard their private jet.

The billionaire couple’s children had gone home on Tuesday as discreetly as they arrived on a commercial flight back to the United States.