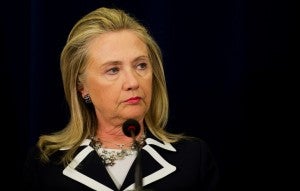 Filipino-American community leaders have backed former First Lady and secretary of state Hillary Clinton, who announced Monday that she would seek the presidency for a second time.

Bueno said Hillary’s candidacy will address issues affecting Fil-Ams and other groups in the AAPI community, including immigration reform, access to education, health care, housing and opportunity for entrepreneurs.

Hillary will also champion eliminating gaps in services to seniors and job training to help address income inequality, she added.

The AAPI group led by Bueno includes as honorary chairs US Senator Mazie Hirono and 10 Asian American members of US Congress. It is part of the national Ready for Hillary movement that focuses on grassroots organizing and has a network of 135,000 donors.

“We need (Hillary’s) vision, leadership and dedication to public service, and our AAPI and Filipino community is part of that vision,” said Fil-Am Gene Benavides, a member of Ready for Hillary National Finance Council.

“Please join me and others in supporting Hillary for America and help begin the conversation why Hillary should be our next president.”

A national survey showed that 73 percent of AAPIs voted for President Barack Obama in 2012 and these votes will translate into votes for Hillary in 2016, said Melissa Ramoso, California state chair of the Filipino American Democratic Caucus.

In a recent public event in Washington DC, National Federation of Filipino American Associations (Naffaa) National Chair Emeritus Loida Nicolas Lewis — a supporter and close friend of Hillary — called on Fil-Ams to participate in the 2016 elections.

“(The 2016 elections) is going to be vey important,” Lewis said. “Indeed, we can be the swing vote in states like Virginia where our numbers are large.”

“Secretary Hillary Clinton is a very close and long-standing friend of the Philippines,” said Del Rosario in a text message to select reporters. “We extend to her our best wishes.”