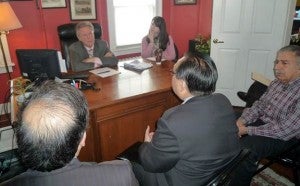 NEW YORK CITY – Leaders of the Filipino American community accompanied by the Philippine consul called on Rep. Frank Pallone (Dem.-New Jersey) in Long Branch, New Jersey April 7 to alert him to their concerns as constituents of his district and China’s actions in the West Philippine Sea, and thank him for his support of Filipino World War II veterans.

Consul General De Leon stated that Filipinos and Filipino Americans are now the second largest Asian-American population in the US, next to Chinese.  In the 6th District of NJ, there are 7,156 Filipino-Americans based on the latest US Census.

De Leon took the opportunity to thank Pallone for his co-sponsorship of House Resolution (HR) No. 535 on the Philippine Veterans’ recognition for the Congressional Gold Medal Award, which is awaiting action in the US Congress.

This award is important to Filipino veterans and their family members who remain hopeful that the US will finally recognize the contributions and sacrifice of Filipino veterans’ in WWII, he added.

Representatives Juan Vargas and Mike Thompson, both Democrats in California, filed the bill January this year that seeks to obtain recognition for Filipino and Filipino American WWII veterans for their services and qualify for the Congressional Gold Medal Award, an honor previously given to other minority groups. 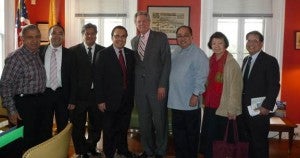 Community members usually accompany Consul De Leon during such calls not only to lend support but to also raise local issues of importance to them, particularly for those living in the same district of the Congressman.

De Leon also reported on the status of the ongoing Arbitration in the International Tribunal on the Law of the Sea (ITLOS) between China and the Philippines on the issue of the West Philippine Sea. A decision on the merits and jurisdiction of the court is expected to be issued between January to April 2016.

He mentioned that the US Senate recently issued a Resolution affirming the freedom of navigation in the South China Sea and the integrity of the Philippines-US Mutual Defense Treaty.

He stressed that Philippines has always adhered to rule of law, particularly the UN Convention on the Law of the Sea and the Declaration on the Conduct of Parties in the South China Sea. The Filipino community members aired their worry over China’s ongoing provocative actions.

The 14th-termer Pallone reiterated his support for Filipino veterans and HR 535. He disclosed that his father was in the US Air Force as a tailgunner in a B-29 aircraft in WWII and saw action in the Philippines and served during the US Occupation of Japan.

Pallone was likewise pleased to be informed of developments relating to the Arbitration and promised to look into these matters more closely. He expressed concern over China’s action in the South China Sea vis-à-vis other claimants such as the Philippines, Malaysia, Vietnam and Taiwan.

One Filipino leader reported on the ongoing campaign of the Filipino community dubbed “Filvote” to increase voter registration in US elections, which Pallone praised. Another expressed the hope that many Filipinos will participate in US elections and said that they generally do not forget their friends at the polls.