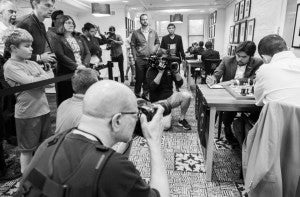 Wesley So is an interested spectator, along with members of the media, in the game between Hikaru Nakamura and Alexander Onischuk in the US Chess Championships. PHOTO BY LENNART OOTES.

, Nevada — Wesley So ended the US Chess Championships with flourish, beating grandmaster Keyden Troff in the final round while Hikaru Nakamura and Ray Robson maintained their 1-2 finish with similar impressive wins in Saint Louis.

So prevailed over the 16-year-old Troff in 42 moves for his second straight victory following a 9th round forfeit, while the issues that distracted him in the tournament

went full blown into the open, with his mother, Lenny So, granting a no-holds-barred interview with a chess website.

The 27-year-old Nakamura, the No. 3 in the world, prevailed over Alexander Onischuk and remained as the only unbeaten player in the 12-man tournament.

So managed to finish third with 6.5 points, despite suffering four loses, including the 9th round forfeit to Varuzhan Akobian — his most losses in a tournament.

But while the on-board results

were pretty much expected, the off-the-board drama was not.

After a long silence, Lenny So fired some well-directed shots at former actress Lotis Key, who has provided Wesley a home in Minnesota after he left Webster University

In an interview with chessdom.com, Lenny blamed Key for the family’s estrangement with their son and the intense struggle for Wesley’s loyalty.

For the whole interview, visit :

Shocker: So forfeits 9th round in US Chess meet