Aquino orders release of P4.9B to beef up sea defense 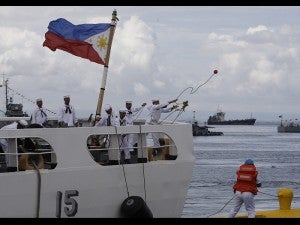 Philippine Navy sailors on board the BRP Gregorio Del Pilar (PF 15) throw ropes as they dock during arrival ceremonies at Manila's pier. AP

MANILA, Philippines—President Benigno Aquino has ordered the release of P4.95 billion to enhance the Armed Forces of the Philippines capability to protect the country’s territories in the West Philippine Sea, Budget Secretary Florencio Abad said.

“The P4.95 billion will fund necessary capability requirements of the AFP in its territorial defense operations, including providing a strong security perimeter for the Malampaya Natural Gas and Power Project,” Abad said.

The Malampaya project is near the disputed Spratly Islands, a potentially mineral-rich archipelago in the West Philippine, also known as South China Sea, where the overlapping claims of China and the Philippines had in recent months triggered diplomatic flare-ups.

“We are ensuring that each and every peso spent by the AFP will directly result in better equipment and other operational support for our men-and-women in uniform,” Abad said.

Of the military fund, P2.65 billion will bankroll the acquisition of another high-endurance cutter sea vessel, three sea patrol helicopters, and other coast watch requirements of the Philippine Navy, he said.

The remaining P2.3 billion will be used to buy three helicopters and develop a base hangar of the Philippine Air Force, Abad said.

In April, the Philippine military received P423 million for the acquisition of the BRP Gregorio del Pilar, formerly a Hamilton 378-foot High Endurance Cutter from the US Coast Guard, which will patrol the country’s territories in the West Philippine Sea, particularly the Reed Bank, Kalayaan Island Group, and Mapun, Sulu Sea.