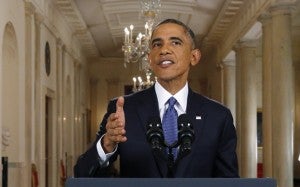 KINGSTON, Jamaica—US President Barack Obama said Washington is concerned China is using its “sheer size and muscle” to push around smaller nations in the South China Sea, just hours after Beijing gave a detailed defense of its creation of artificial islands in the contested waterway.

China’s rapid reclamation around seven reefs in the Spratly archipelago of the South China Sea has alarmed other claimants, such as the Philippines and Vietnam, and drawn growing criticism from US government officials and the military.

While the new islands will not overturn US military superiority in the region, workers are building ports and fuel storage depots and possibly two airstrips that experts have said would allow Beijing to project power deep into the maritime heart of Southeast Asia.

“Where we get concerned with China is where it is not necessarily abiding by international norms and rules, and is using its sheer size and muscle to force countries into subordinate positions,” Obama told a town-hall event in Jamaica on Thursday ahead of a Caribbean summit in Panama.

“We think this can be solved diplomatically, but just because the Philippines or Vietnam are not as large as China doesn’t mean that they can just be elbowed aside,” he said.

The United States has no claim of its own, but broadly supports its Asian allies against Chinese pressure and has asserted that freedom of navigation is in its national interest.

“I think you will agree with me that China has been a robust force for the preservation and promotion of peace and stability in the South China Sea,” she said.

In an apparent reference to the United States, Hua said: “I think everybody can clearly see who has the biggest size and muscle in the world.”