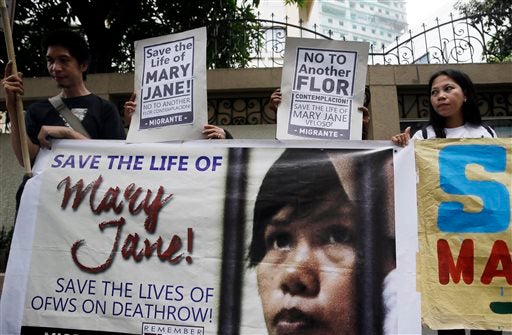 Supporters display placards outside the Indonesian Embassy at the financial district of Makati city, east of Manila, Philippines during a picket Wednesday, April 8, 2015 to ask for clemency for convicted drug trafficker Mary Jane Fiesta Veloso. AP

The family of Mary Jane Veloso, the Filipina now sitting on death row in Indonesia for drug trafficking charges, on Friday sought the help of the Catholic Bishops’ Conference of the Philippines (CBCP) to stop the execution of their loved one.

“Ang mahihiling ko lang talaga ay makalaya ang anak ko. ’Yan ang pinakaaasam ng aming buong pamilya. Wala na kaming hangad kundi makalaya ang anak ko (All I’m asking is for my daughter to be freed. That’s what our whole family has been yearning for. We have no desire other than to see her free again),” Veloso’s mother, Celia, said in between sobs during a meeting with some CBCP officials.

“Kahit naghihirap kami, ’di ko kailangan ang yaman basta ’andyan ang anak ko. ’Yun lang gusto ko mangyari, ang anak ko po tulungan nila makalaya (Even if we are poor, as long as my daughter is with us, it doesn’t matter. That’s all I want, for them to help my daughter regain her freedom).”

Celia, her husband Cesar and Mary Jane’s two sons were accompanied by some members of militant group Migrante during the meeting.

For his part, Fr. Jerome Secillano, executive secretary of the CBCP Episcopal Commission on Public Affairs, said the CBCP may issue a statement later on.

“First let’s hear the pleas of Mary Jane’s family. The next step is to relate it to the secretary general of the conference … we’re doing this to ascertain what actually happened based on the narratives of Mary Jane’s parents,” said Secillano.

“The concrete action that can be done is to issue a statement in order to help Mary Jane. If it’s possible, perhaps the CBCP leadership might coordinate with proper authorities to, hopefully, save Mary Jane,” he added.

“I don’t want to preempt anything but that statement would probably be an appeal for Mary Jane to be given another chance, if not to release her, maybe an appeal for her case to be reviewed,” Secillano said.

Santos said the CBCP is one with different people’s groups and the Philippine government in appealing to the Indonesian government to spare Veloso from death by firing squad.

“We storm heavens with prayers that she be saved from this tragic fate. We join the appeal to Indonesian authorities to spare her the death penalty … At this time it is important for all of us to be one in prayer to save Jane’s life,” the bishop told Church-run Radyo Veritas. RC

Gabriela urges Aquino to save OFW on Indonesia death row