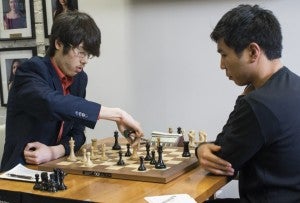 Chess grandmasters Ray Robson (left) and Wesley So in the US Chess Championships. US CHESS CHAMPIONSHIPS PHOTO

LAS VEGAS – Wesley So stumbled again, bowing to Webster University teammate Ray Robson in the sixth round April 7 of the US Chess Championships in Saint Louis.

Playing black, So engaged his former roommate in an exciting middle game, but Robson steadily built up his advantage, nursing a queenside passed pawn and forced resignation after 42 moves.

“I feel bad for him,” Robson said of his close friend. “I have lots of respect for him.

It was a revenge of sorts for Robson, long Webster’s No. 2 when So was playing there, and for his loss to So for the $100,000 first prize in the Millionaire Chess Open in Las Vegas last year.

For So, who went a stretch of 54 games without losing in over a year, it was his second loss in six games, having lost to 15-year-old Sam Sevian in the third round.

The 21-year-old So is playing an erratic game, surprising for someone who has built a reputation of steady play and caution.

In the fifth round, he beat Timur Gareev in a wild game in which the result was unclear for some time.

So was puzzled that after an eight-minute pause to think Gareev came up to him and offered his hand.

“Being a gentleman, I had to shake his hand,” So said in an interview with chess24.com. “But I wasn’t sure whether Gareev was resigning or offering a draw.

With three wins and a draw — against two loses — So has 3.5 points, just a point behind the tournament leader, Hikaru Nakamura, who drew his sixth round match.

The draw with Sam Shankland was the third in six games for Nakamura, who expressed disappointment in his failure “to put distance” between him and his rivals.

The 27-year-old Nakamura also drew with So and defending champion Gata Kamsky but has jumped to No.3 in the world in live rating as of April 7 with 2,801 points behind world champion Magnus Carlsen and Fabiano Caruana.

So, meanwhile, has lost 5.9 points in the tournament and has dropped to No. 9 in world ranking with 2,782 points.

So and Nakamura draw at US Chess Championship