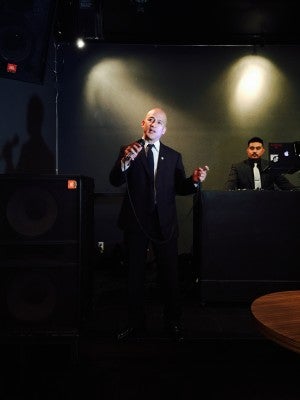 About 400 days ahead of the June 2016 elections, the announcement formalizes his bid for the District 5 seat to be vacated by Board Member Adrienne Tissier next year due to term limits.

The first Fil-Am elected to the Daly City council, Guingona aims to make history once again as the first Asian to represent District 5, which includes Daly City, Colma, Brisbane and parts of South San Francisco and San Bruno.

Fellow Daly City Council Member Judith Christensen was among his well-wishers, along with officials from the Jefferson School District and members of various Fil-Am community groups.

“My family gave me the opportunity to be able to do something like this,” said Guingona, a five-term mayor, lawyer and graduate of the University of San Francisco’s School of Law. “To run for office is an opportunity that I cannot pass up.”

Serving in the Daly City council for over two decades now, Guingona explained that he had previously shied from county-level politics because the timing didn’t seem right. This time is different as he draws confidence from his support base.

The Fil-Am councilor listed fiscal soundness as his top priority. On top of sustainable government budgets, his focus will be on promoting economic development and local job creation, maintaining quality public services, investing in city services for the seniors and youth, and improving transportation systems.

He pledged to improve the county healthcare system–especially affordability for families and seniors–and the transportation network throughout the county if elected to the District 5 seat.

Being a second lieutenant in the California Military Reserve, Guingona noted the one thing “they taught me in the military, it is that mission first.”

The former mayor, who is also a high school teacher and a wrestling coach, said that in his 22 years of public service, “there is one thing that I’m worth by and that is my ability to work with other people; my ability to be goal-oriented; my ability to get things done”.

“When he says he can get along with people and work projects—that’s what we’re doing right now. We’ve got a lot of things in the hopper to make Daly City a better city and a healthier city,” she said.

“Today is just a beginning of a long journey to victory,” added Daly City Planning Commissioner Ray Satorre. “I believe that Mike Guingona is the right guy [for the job]. We need to see to it that the north county of San Mateo will be properly represented by him.”