More than 10,000 troops to join Balikatan 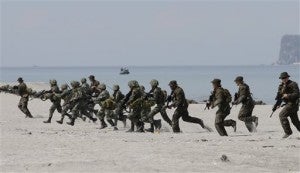 More than 10,000 Filipino and American troops will participate in the Balikatan 2015 (BK15) war exercises scheduled later this month amid frenzied land reclamation activities by China in the disputed Spratly group of islands in the South China Sea.

But the Philippine military stressed on Tuesday that the big number of participants was neither a show of force against China nor related to the heightened tension in the Spratlys.

Lt. Col. Harold Cabunoc, chief of the Armed Forces of the Philippines’ public affairs office, dismissed speculations that the joint US-Philippines war exercises were meant to send a strong signal to China that the two countries would not tolerate any hostile action in the disputed islands.

The AFP will deploy 5,023 soldiers while the US Armed Forces will send 6,656 troops to join the exercises. The Australian Defense Forces (ADF), which will also take part in some exercises, will send 61 participants.

Cabunoc said the big number of troops and aircraft participating from both sides showed an increase in the level of commitment from both countries’ Armed Forces to improve capabilities in military to military engagements and even nonmilitary activities.

No show of force

“This is not a show of force, and it has no direct relationship to the ongoing (Chinese buildup of) structures which we believe have military purposes,” Cabunoc said in an interview at Camp Aguinaldo.

But he said the AFP was leaving this issue with the Department of Foreign Affairs which had been pursuing a peaceful resolution to the conflict before the United Nations.

Cabunoc said the US military did not even consider the Chinese threat in the planning and execution of the exercises.

This year’s Balikatan, to be held from April 20-30, is the 31st in the series of bilateral exercises provided for under the 1951 Mutual Defense Treaty.

The exercise was designed to enhance capability development between the Armed Forces of the Philippines and the US Armed Forces under their Mutual Defense Treaty.

BK15 will be conducted in three simultaneous events.

The Command Post Exercise will focus on Marine Security with Combined Arms Live Fire Exercise to demonstrate the capability of the AFP National Maneuver Force. Selected US and ADF staff members will form a Joint Liaison Group to support the capability development at each staff.

The opening ceremony for Balikatan 2015 will be held on April 20 at Camp Aguinaldo in Quezon City while the closing ceremony will be conducted at Clark Air Base on April 30.

Navy Vice Admiral Alexander Lopez will be the Balikatan exercises director for this year, while Brig. Gen. Rodolfo Santiago, commandant of the AFP Command and General Staff College, is the vice director.