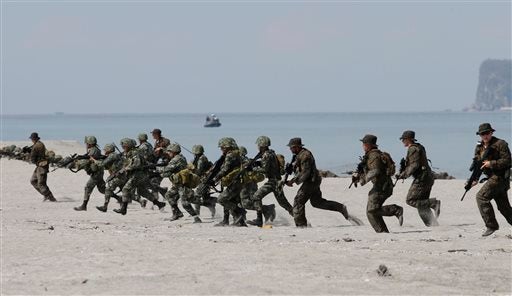 Shoulder to shoulder, Filipino and American troops will come together this month for their regular Balikatan joint military training exercises. And they will be joined by a few Australians.

This year’s Balikatan (BK15) will be held on April 20-30 and is the 31st in the series of bilateral exercises provided for by the 1951 Mutual Defense Treaty between the Philippines and the United States.

The exercise aims to enhance the capabilities of the Armed Forces of the Philippines and the United States Armed Forces. Aside from traditional military training, the exercise promotes civil military projects in local Filipino communities.

The AFP will deploy 5,023 personnel and the US 6,656. The Australian Defense Forces (ADF) will take part in some exercises and send 61 personnel.

The AFP will deploy 15 aircraft, the US 76 and the ADF one. The AFP will sail one of its ships while the US will send three.

“Our and the US’s armed forces are coming together for this mutual defense and disaster response exercise toward a more responsive partnership focusing on development and community service,” AFP Chief of Staff Gen. Gregorio Pio Catapang Jr. said.

BK15 will be three-pronged.

The Humanitarian Civic Assistance exercise will focus on joint civil-military operations by the AFP, USAF and ADF in the Western Command (Wescom) area of responsibility in Puerto Princesa City and the Central Command (Centcom) area in Panay.

The Command Post Exercise will focus on marine security with live arms fire to demonstrate the capabilities of the AFP National Maneuver Force. US and ADF personnel will form a joint liaison group in support of capability development.

The training will enhance capabilities and tactics, techniques and procedures, reinforce relations and improve the interoperability of the AFP, USAF and ADF.

The Balikatan (which means shoulder) opening ceremony on April 20 will be held at Camp Aguinaldo, Quezon City. The closing ceremony will be at Clark on April 30.