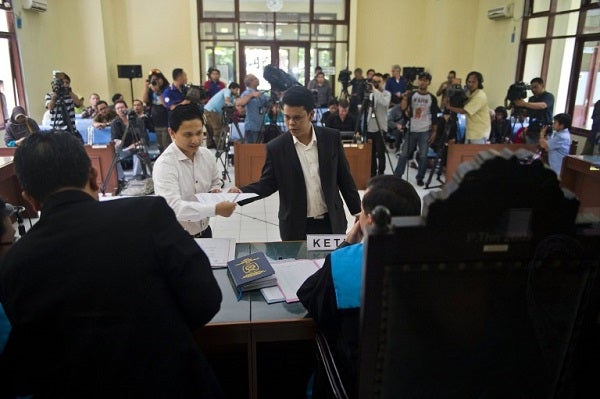 The State Administrative Court in Jakarta said it did not have the authority to hear the challenge to President Joko Widodo’s decision to reject their mercy pleas, upholding its own ruling handed down in February.

Andrew Chan and Myuran Sukumaran, the ringleaders of the so-called “Bali Nine” drug trafficking gang, were sentenced to death in 2006 for trying to smuggle heroin out of Indonesia.

Widodo recently rejected their pleas for presidential clemency, typically the final chance to avoid execution. They are expected to be executed soon with other drug convicts, including foreigners from France, Brazil, the Philippines, Nigeria and Ghana.

Jakarta has said it will wait for all legal appeals to be resolved before putting the group to death at the same time. Some other convicts have lodged Supreme Court appeals, which could take weeks to resolve.

The men’s legal team have mounted several attempts to halt the executions. In their latest, they called for the State Administrative Court to hear an appeal against Widodo’s clemency rejection, saying that he failed to properly assess their rehabilitation or give reasons for his decision.

The court refused to accept the application in February, and the Australians’ lawyers appealed that decision.

But at a hearing on Monday, presiding judge Ujang Abdullah upheld the original decision that the court does not have jurisdiction to rule on the matter.

Ruling on Chan’s case, he told the court: “The appeal by the challenger is rejected.”

It was not immediately clear whether the Australians’ lawyers would pursue other legal avenues.

Jakarta originally planned to carry out the executions in February, but following an international outcry agreed to let legal appeals run their course.

A Filipina among the group recently lost an appeal to the Supreme Court, while a Frenchman and Ghanaian last week lodged appeals with the court.

Australia, Indonesia’s neighbor and traditionally a key ally, has mounted a sustained diplomatic campaign to try to stop its citizens being put to death, while France and Brazil have also stepped up diplomatic pressure on Jakarta.

But Widodo, who has taken a hard line against drugs offenders, has not been swayed. He has vowed there will no mercy for traffickers, saying Indonesia is facing an “emergency” due to rising narcotics use.

Jakarta in January put to death six drugs offenders, including five foreigners, sparking a diplomatic storm as Brazil and the Netherlands — whose citizens were among those executed — recalled their ambassadors.

Brazilian President Dilma Rousseff in February refused to accept the credentials of the new Indonesian ambassador. A second Brazilian, Rodrigo Gularte — whose family say he is mentally ill — is scheduled to be put to death in the next batch of drugs offenders.

Indonesia resumed executions in 2013 after a five-year hiatus. It did not put anyone to death in 2014.

The other seven members of the “Bali Nine” are serving long jail sentences in Indonesia.