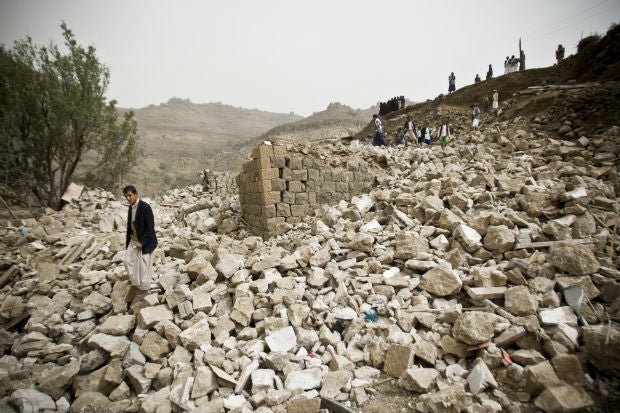 Yemenis stand amid the rubble of houses destroyed by Saudi-led airstrikes in a village near Sanaa, Yemen, Saturday, April 4, 2015. AP

NINETY-NINE Filipino nationals have been evacuated from Yemen due to the escalating conflict in the country, as Saudi Arabia and other Arab nations continue to batter areas held by the rebels through air strikes, the Department of Foreign Affairs (DFA) reported yesterday.

In a news release issued in Manila, the DFA said a crisis management team led by Philippine Ambassador to Saudi Arabia Ezzedin Tago plucked 54 men, 43 women and two infants out of the the war-torn Arab country. With the ambassador are officials and personnel from the Philippine embassy in Riyadh and the Philippine consulate general in Jeddah in Saudi Arabia.

The group, traveling on a convoy of two buses, left the western Yemeni city of Hodeidah at 7 a.m. (Saudi time) on Sunday and arrived at the Tuwal border crossing of Saudi Arabia four hours later on the same day.

“The journey was generally safe even though the group had to pass through several checkpoints along the 215-kilometer route,” the DFA said.

At press time, government officials are assisting evacuees in Jizan in Saudi Arabia by providing them food and accommodation as well as arranging their onward travel to the Philippines.

The Philippine team will undertake another evacuation today by land from the Yemen capital Sana’a via Hodeidah.

News reports said countries have been scrambling to evacuate their citizens from Yemen as the Shia Houthi rebels continue to make gains despite air strikes led by its neighboring country Saudi Arabia.

Recently, DFA officials aired their frustration over the insistence of the Filipino nationals to stay behind despite the deteriorating security situation in the country.