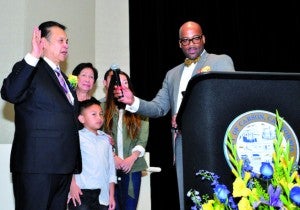 Santarina’s new four-year term marks the fourth time he has been elected to the city council.

“Once again, you have validated the services I have rendered in the many years I have served you and again from the bottom of my heart, thank you for your trust, confidence and support,” the mayor pro tem told attendees at Tuesday’s ceremony.

Santarina added that his position gives him the opportunity to represent the Filipino American community and actively participate in mainstream US politics for the benefit of all citizens.

“Being in an [elected] position also makes me a role model to the new generation of Filipino Americans,” he wrote in an email to the Asian Journal.

Other city officials also sworn in were former Mayor Jim Dear who is now Carson’s City Clerk, councilmember Lula Davis-Holmes, and city treasurer Monica Cooper. Councilmember Albert Robles was not on stage during the event.

With Dear vacating the post of mayor, Santarina will serve the position until April 7, when the councilmembers will meet to see if they can agree on a replacement to appoint.

Amid Carson’s ethnically diverse population – with Hispanics, Asians, Blacks and Caucasians each accounting for more than 20 percent of the city’s population, according to the 2010 Census – maintaining unity was an issue of importance Tuesday evening.

“I want to thank every one of you. This is a diverse community,” Davis-Holmes said during her speech. My votes showed I represent all ethnic groups here in the City of Carson. All ethnic groups. I love my seniors and love my children, and those in between I want you to keep pushing me up.”

As an elected official in Carson, Santarina said he is called to lead and serve the city, “to lead and help get along with each other in peace and harmony, through Democratic processes, to serve our population of varying ethnicities, each with interests of its own which from time to time will be found in conflict with each other.

“But, honestly speaking, I believe there is no difference that cannot be overcome by serene and calm dialogue and reasonable minds. There is a place for all of us in the city of Carson.”

“Let us be guided by what Dr. Martin Luther King, Jr. said: ‘Our loyalties must transcend our race, our tribe, our class.’ Thus, let us subserve our provincial interests. Let us be united and concerned for everyone’s well-being,”

Tuesday’s ceremony consisted not only of the swearing-in of officials, but entertainment including dance, singing and cheerleading. It was also a faith-heavy one, with pastors conducting prayers for the city and for the elected officials.

“God knows your purpose and calling in life. He called me to serve at a time such as this, and I take that willingly and I’m humbled,” Davis-Holmes said.

Dear, who has served as an elected official for the City of Carson for 14 years, touted the improvements the city has made in the years he held office, citing that Carson’s crime rates are at its lowest in history and that it is being considered the site of an NFL stadium.

“It is with a heavy heart that I am now vacating mayor’s office to serve as your city clerk,” Dear said.

With his experience and track record as mayor, however, he said he will work to further serve the city.

“I will bring that determination and talent, that skill that I so proudly serve you with, as your city clerk, and make that office work for you, the people of Carson,” he said.