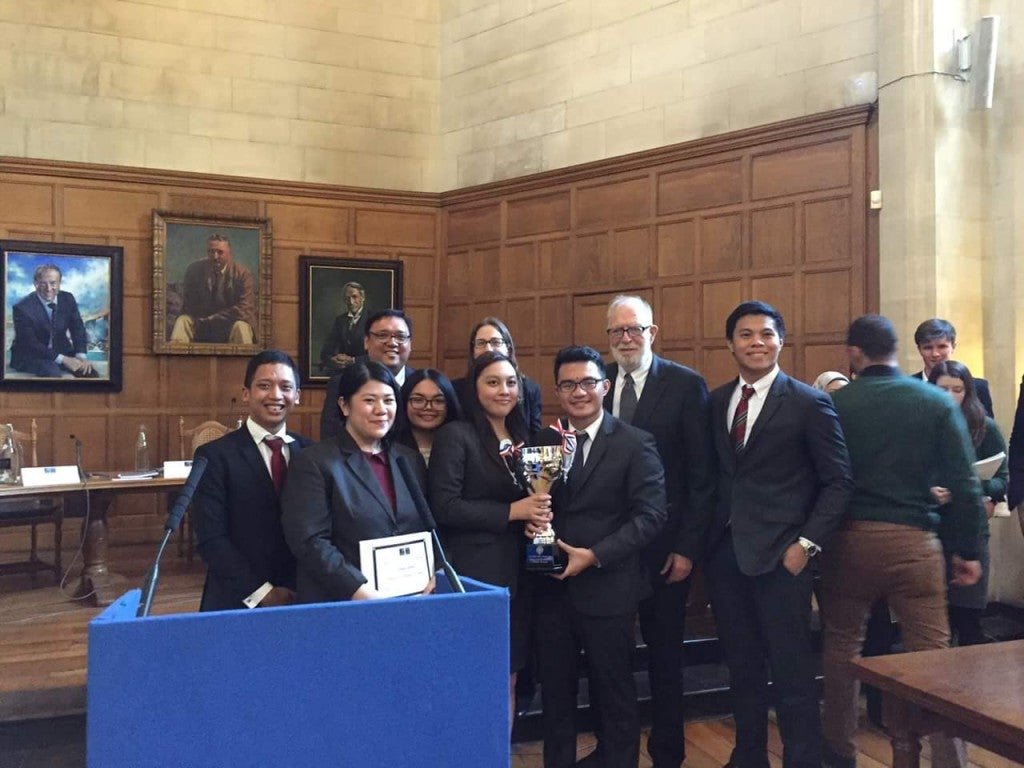 Mooters from the University of the Philippines are declared as the overall champ in the international rounds of the Price Media Law Moot Court Competition in the United Kingdom. Photo taken from Harry Roque’s Facebook page

For their expert arguments on an issue that hit close to home, a team of University of the Philippines (UP) scholars took the championship in an international moot court competition in the United Kingdom this week, winning the first championship ever for the Philippines.

“The UP team was composed of veteran mooters deeply committed to the cause of human rights. Their incredible mastery of freedom of expression led to their victory in Oxford, which is a first for the country,” law professor Harry Roque, the team’s coach, said in a text message early yesterday.

The team from the UP College of Law was declared the overall champion in the 2015 International Rounds of the 8th annual Price Media Law Moot Court Competition, held at Oxford University from March 24 to 27.

BACK STORY: UP in Oxford moot court

Roque announced the victory on Facebook a little past midnight on Friday, just moments after the Philippine team was declared the champion by unanimous decision.

Double victory for UP

“It proves anew that UP Law is truly among the best law schools in the whole world. Its victory was a victory of the entire Filipino nation,” he told the Inquirer.

The win came just as the state university was celebrating another topnotch performance in the bar examinations, with four of its graduates figuring among the top 10 passers, the most number of any law school.

The team beat the Singapore Management University in the final round held at Oxford’s Rhodes House, winning the judges’ nod for their defense of hate speech legislation in the moot case.

“They defended a legislation of a fictitious country that found a blogger civilly liable for advocating converting a minority religion by all means,” Roque said.

“They also argued that the [Internet service provider] that did not remove a video that led to a riot injuring hundreds was civilly liable under a conditional liability regime [because] it had noticed but did not take down the video,” he said.

The Philippine team took the trophy at the culmination of the four-day competition, where it also beat teams from the United States and the host country through several rounds.

The team advanced to the international rounds after winning the Asian regionals held at Beijing’s Renmin University last year.

Moot court competitions, where law students take part in simulated court proceedings, have long been recognized as a crucial training ground for law students, preparing them for real-world litigation.

Founded and run by the Program in Comparative Media Law and Policy (PCMLP) at the University of Oxford since 2008, the Price Media Law Moot Court Competition aims to foster and cultivate interest in freedom of expression issues and the role of the media, and information technologies in societies around the world.

It is named after Monroe E. Price, the professor who cofounded the PCMLP.

The competition aims to “foster an interest in some of the most cutting-edge issues of our time: the role of new information technologies and free speech” by using “solid empirical research that is grounded in historical context and [based on] a dialogue between all those involved and affected,” said an earlier statement from UP announcing its participation in the competition.