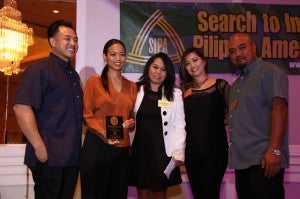 LOS ANGELES — A Filipino-owned restaurant called the Park’s Finest was among the achievement awardees at the 43rd anniversary awards and benefit dinner of Search to Involve Pilipino Americans (SIPA) on Thursday, March 12 at the Sheraton Universal Hotel.

The popular eatery, tucked along Temple Street near the 101 Freeway, was honored as a successful business. Filipino Angelenos who grew up in Historic Filipinotown founded the eatery at a time when violence and urban unrest were common occurrences. It has become a hit among celebrities and has been featured in TV food shows.

By participating in a small business program facilitated by SIPA– a non-profit Filipino-American empowerment organization by providing health and community services among others — Concordia and his family were able to get their business, which started out as a small-scale catering company, up and running in 2009.

Thursday’s event marked the 25th year that SIPA has held such a dinner, which is conducted to raise money and allow for networking.

“We want to give an opportunity for our community and stakeholders to interact and remain close to SIPA by what we do,” said Joel Jacinto, executive director of SIPA.

Talent + an event to raise funds

Prior to and throughout the dinner, a silent auction was also held to raise money for the organization. A variety of items were up for bid, including tickets to Disneyland, DVDs and gift certificates to wine tasting and restaurants.

The dinner also shone a spotlight on talented Filipinos affiliated with SIPA, including the evening’s emcee, Giselle “G” Tongi, host and producer of “Kababayan Today” on LA18.

Tongi, who has emceed the event twice, was a former intern at SIPA while she attended college at UCLA. She developed a curriculum on teaching Filipino-American culture to Fil-Am students and taught an after school program for children.

“It was a wonderful experience and I got to meet everyone in the community, and SIPA is just one of the organizations that I’m constantly present for just because of the amazing work that they do and they really are transformative in the lives of so many Fil-Ams,” Tongi said.

“It’s just a wonderful community to be a part of and also they’re able to raise funds that our people need. So I’m very excited to be a part of this in any way, shape or form that I can help out.”

SIPA Crew, a Hip-Hop dance team that performs in the Filipino-American community, livened up the evening with vibrant dance numbers to snippets of popular songs. With help from Tongi, the group managed to raise $3,500 in a matter of minutes through a live auction. Attendees sponsored a total of 14 “steps” worth $250 each for SIPA Crew. Following each pledge, dancers performed a step on stage.

Filipino multi-instrumentalist Abe Lagrimas also captivated the crowd with a skillful performance on the ukulele.

About 200 individuals attended the Thursday event, which cost $175 per ticket. Funds raised during the event are directed toward SIPA general operating expenses and Delta Force, the organization’s youth leadership program, which focuses on areas including urban dance and technology.

Although SIPA has always raised money through its annual dinners, Jacinto said Thursday’s event was unique compared to previous ones as the organization this year is contemplating on whether such an event is the most effective way to pull in money for the community.

“We had fewer people attend than last year,” he said. “Half a decade ago we were getting 500 people. Now we’re at less than half of that it’s definitely a trend in the challenges of fundraising.”

He further pointed out that SIPA’s biggest sponsors aren’t members of the Filipino-American community, but rather corporations.

“We have to balance our own Fil-Am community with corporate America,” he said. “We have to find a fundraising event in a primarily Filipino community.”

Despite questions about how effective dinners are, Jacinto was overall pleased with the dinner last week and said SIPA got close to its fundraising goal through the dinner.

“[Thursday’s event] was positive,” he said.