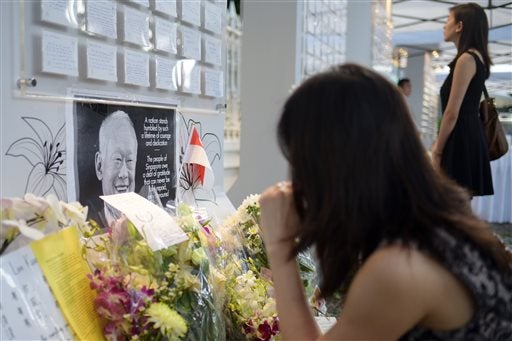 MANILA, Philippines—He wanted to be the Lee Kuan Yew of Makati.

Vice President Jejomar Binay has said that the late Singapore Prime Minister Lee Kuan Yew was his “inspiration in rebuilding Makati” as he extended his condolences to the Lee family and join the people of Singapore in mourning the loss of its first Prime Minister.

Binay, in a statement issued Monday, said that he has always admired the late Prime Minister including the success story of Singapore.

“His political will and pragmatic approach to governance was my inspiration in rebuilding Makati after the 1986 EDSA Revolution from a bankrupt municipality to the country’s premier city providing unparalleled social services to its constituents,” Binay said.

The Prime Minister, who is credited for transforming Singapore, died on Monday, March 23, at the Singapore General Hospital after more than a month of confinement due to pneumonia.

“As the architect of modern Singapore, the late Prime Minister shaped his country into one of the most prosperous countries in the world,” Binay said.

“He is a dedicated public servant and a well respected leader. The success of Singapore is but a testament to his decades of remarkable public service,” he added.

Binay has served as the Mayor of Makati and won as vice president in the 2010 national elections.

The Vice President has already announced his plan to run for president in 2016.