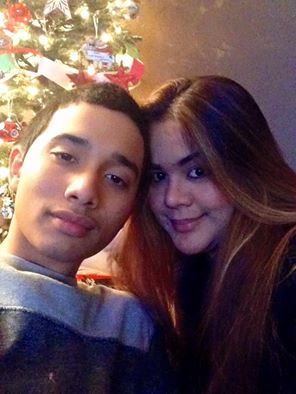 OAKLAND, California – Cebuana Maria Rasner is anxiously hoping for improvements in her son Christian’s condition, days after two Asian-looking males in their mid-twenties senselessly attacked him without provocation in the early evening of Wednesday, March 18 at Westfield Valley Fair Mall in San Jose.

“He is still in induced coma, not yet awake. He was given medicine to paralyze him in the meantime for he cannot still afford to wake up and move because the doctors fear that his brain might swell again,” Maria disclosed.

“It may take the doctors another week to observe how his body system would react given the injuries he sustained. Another week for the doctors to observe whether he can afford to wake once the effects of the drug wore out,” she added.

“They say that some may react positively even after sustaining blows to the brain others may not depending on how healthy the victim is. One thing working for Christian though is that he still young at age 17,” continued Maria.

Born in Cebu City, Christian is the eldest child of three children and was brought to the U.S. when he was six years old. His mother had obtained a fiancé visa with eventual husband, Greg Rasner, who adopted Christian when the couple got married.

Greg is the father that Christian has known and grown up with, having been with him since coming to the United States.

Christian’s real father, who came from an influential well-to-do family that owns several properties in Cebu City, died young at 24 years old — he was shot dead in the same city.

“It was very painful for me when that happened to my first husband and then this happened to Christian now. I was a witness to the violence my husband went through and now … I never imagined that my son would also fall victim to violence,” Maria bared.

(I brought Christian here to America while he was still young thinking he would be safe here. I never thought he would also be involved in violence like his father.)

Still fresh in her mind, Maria remembers she got home late afternoon to find Christian singing and dancing as he usually does in the kitchen. After partaking of the pancit she brought, Christian gave her a kiss and a hug, asking permission to go to the Westfield Valley Fair Mall in San Jose.

At around 8 p.m. as they were about to go to sleep, Maria got a call from a police officer who said that Christian was in an ambulance ready to be brought to the hospital after someone punched him.

She thought all along that her son got into a petty fight in the mall with other teen boys, and for this Christian would get a scolding and probably be grounded.

“When we saw him at the emergency room he was still able to utter clearly, “Mama I love you,” to which I replied, “I love you son. Don’t worry your dad and I here for you,” Maria vividly remembered.

That was the last she heard from him and his eyeball started rolling repeatedly and he was already complaining of extreme head pain.

Then when Christian was asked what year it as and he answered 2007 instead of 2015. That prompted the doctors to be guarded about his condition, especially after he could no longer follow simple hand-to-eye movement instructions.

A CT scan was then done and the doctors found out the bottom part at the back of his skull near the neck part broke and that there was bleeding in the brain. He underwent emergency brain surgery. Since then, there has been no improvement, and Christian is still in a coma.

After Christian said no, the two suspects punched him in the face, causing him to fall on his back, his head hitting the pavement hard. The suspects ran towards the mall. He was still able to go up to walk to the bench with his friends while they wait for the police to arrive after another friend called 911. 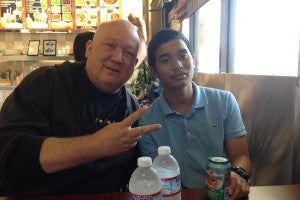 There’s speculation that the suspects may be undergoing gang initiation, part which could be violently attacking someone.

The Rasners said they were satisfied with the police investigation that is still ongoing, with witnesses being interviewed and CCTV footage provided by the mall.

Those close to Christian say he has many friends, but he is not into gangs and was never involved in even trash talks or heated arguments; he simply is not the type.

Maria divulged that he started working part time in October last year also, in a mall, to support his needs while studying.

Christian is a simple teenager who loves his brother and sister and relishes his mom’s sinigang na baboy.

“We are just patiently waiting for him to wake up to be well. We are focused on Christian especially now that he needs us. I was laid-off from my job recently so I don’t have to think of anything related to it. We are constantly in touch with the doctors

, the neurosurgeons. This is something very different to what we are used to. We do not know what will happen, what is in store. My son is fighting for his life,” Maria lamented.

The Rasner couple, in the meantime, thanked strangers, loved ones, friends, co-workers, and everyone who shared not just their prayers, but also material help through the gofundme.com fundraising campaign started by a neighbor and friend.

“It just amazes us and uplifts us. I really love reading the comments left in our Facebook accounts and twitting to #Christianrasner. The words of sympathy and encouragement help us cope with this tragedy. Thanks to all the donors, both known or not,” Maria, joined by Greg, shared.

“We continue to appeal, though, to kindhearted readers and sympathizers to log in to gofundme.com under the” Prayers for Christian” page and share what you can. Of course, prayers are most welcome above all and much appreciated.”

still have to really determine the extent of damage he sustained after the brain injury as soon as he awakes, but physical and mental therapy after he is stable enough would form part of the rehabilitation process.

Because of this, the family anticipates incurring high hospital bills with only Greg earning for the family after Maria got laid off from her job the day before Christian was beaten up.

Those who wish to share, their donations are most welcomed at the link: www. Gofundme.com

Lucio Tan advances to PAL hits P17.7B amid mounting losses due to COVID-19