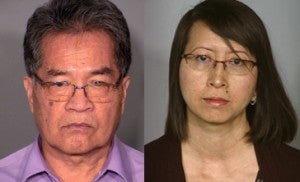 Alex Soria, 69, and Sonia Rodis, 55, were each sentenced in a mortgage assistance scam that misrepresented to homeowners a fraudulent mortgage elimination program that involved recording affidavits, deeds of reconveyance and other title documents that failed to eliminate their mortgages.

Rodis was sentenced to 38 to 96 months in prison, with her sentence suspended for a period of probation not to exceed five years.The couple was ordered to pay restitution totaling over $63,000.

According to records, the mortgage fraud was committed between May 2010 and October 2011.

“It is unacceptable for individuals to prey on hurting homeowners,” said Laxalt. “My office will aggressively pursue those who victimize hard-working Nevadans seeking home mortgage assistance.”

Soria and Rodis operated the mortgage lending fraud scam out of their joint business, BioGreen Teck, LLC. Their “Zero Mortgage Program” promised customers that their mortgages would disappear while they maintain the property title.

They often targeted members of their own Filipino community, among others, and collected approximately $63,000 in payments from their victims.

“These arrests are an important step in protecting homeowners,” former Attorney General Catherine Cortez Masto said in June 2013. “It is appalling that these individuals would make their livelihood off struggling Nevadans, including victims who are over sixty years old.”