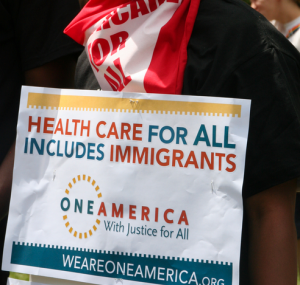 SAN FRANCISCO — The safety net for Californians who have no health insurance is full of holes – and those holes are much bigger for the state’s undocumented people.

That’s one of the main findings of a new study by the statewide health care advocacy coalition Health Access. The organization’s executive director Anthony Wright says the “uneven safety net” puts the state’s remaining uninsured in a position to “live sicker, die younger and be one emergency away from financial ruin.”

“Counties should maintain strong safety nets for the remaining uninsured, through the county-led programs that provide primary and preventative care,” Wright said on a press call last week. “Counties that do not serve the undocumented should reconsider this policy, and focus their indigent care programs on the remaining uninsured population that actually has the most need for a safety net.”

Over a year into the full implementation of the Affordable Care Act, some three million Californians still lack health insurance. For many, that’s because coverage is still unaffordable. And almost half of the three million are undocumented, and thus shut out from federal health programs.

By law, counties have to provide care to low-income individuals who are uninsured and don’t qualify for other programs. But, says Wright, “Counties interpret this responsibility widely and wildly, in very different ways.”

The study found that the number of people enrolled in county-based care programs for the uninsured varied widely according to different counties’ eligibility requirements.

Counties that have more inclusive eligibility requirements, in terms of income and immigration status, still have thousands of people using their indigent care programs – in Los Angeles, for example, over 80,000 people are enrolled in the My Health LA program, which is open to undocumented immigrants, and assigns individuals to community clinics.

But counties that have more stringent eligibility requirements have far fewer people enrolled. Counties like Merced, Placer, and Tulare report that they now serve no one in their health care programs for the poor and needy.

That’s not because there isn’t a need, according to Wright, but because “those programs aren’t geared to the remaining uninsured that are left.”

Sacramento County is one of the 48 counties that don’t provide care to undocumented immigrants. It used to, but stopped in 2009 during the financial crisis.

Carlos Garcia, who spoke on the call along with Wright, is undocumented and recently moved to Sacramento from San Mateo. He hurt his leg in an accident and now the leg is infected. He says he was prescribed antibiotics instead of more comprehensive treatment because he doesn’t have health coverage, but he can’t even afford the medication.

He’ll need to drive back to San Mateo for further treatment – San Mateo is one of the 10 counties that provide care to the undocumented – but he’s worried about being able to pay for gas.

“I haven’t been able to work because of this,” he said through a translator. “I feel desperate.”

The proposed “Health For All” bill (SB 4) could help Garcia if it passes this year. The legislation, originally introduced in 2014 and re-introduced in 2015 by Senator Ricardo Lara (D-Los Angeles), would guarantee health coverage to everyone in the state, regardless of immigration status.

“County-based programs should be a bridge to a statewide solution, as being discussed here in the state capital, that would extend affordable coverage to all Californians,” says Wright.

“Our health system is stronger when everyone is included,” he says.