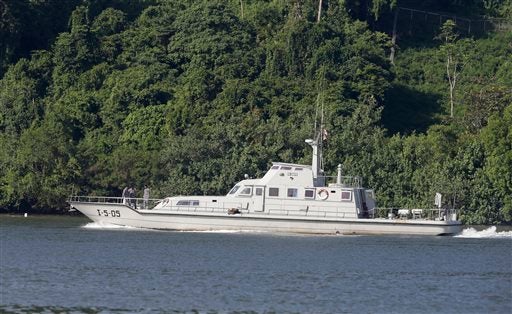 In this March 9, 2015, file photo, an Indonesian Navy boat carrying armed crew members patrol the waters near the prison island of Nusakambangan, background, as seen from Cilacap, Central Java, Indonesia. Indonesia may not execute 10 drug smugglers in the near future pending rulings on legal appeals filed by some of them. AP PHOTO/ACHMAD IBRAHIM

JAKARTA, Indonesia—Indonesia’s vice president said Wednesday that the execution of 10 drug smugglers, nine of them foreigners, might not happen in the near future because some of them have legal appeals pending.

Vice President Jusuf Kalla said the government has to be careful and await the decisions by the Supreme Court.

Authorities had previously indicated the execution was imminent. Nine men are now jailed on a prison island where Indonesia conducts its executions, and final preparations for the firing squad to execute the group were done.

The execution was adjourned since four of them filed judicial reviews and two challenged the president’s rejection of clemency in the administrative court.

“Actually that (executions) should have been carried out weeks ago but some of them have filed judicial review to the court,” Kalla told the private El Shinta radio station in an exclusive interview. “The Attorney General has to await the rulings … so that there would be no legal problem in the future,” he said.

The execution strained Indonesia’s diplomatic relations, particularly with Australia and Brazil, which sought to spare their citizens. Kalla reminded that the issue has drawn the world’s attention, “therefore the government has to be careful in term of legal aspects.”

The Jakarta High Administrative Court is expected to hold a hearing Thursday on an appeal by the Australians, Andrew Chan and Myuran Sukumaran. Their lawyers argue that President Joko Widodo’s refusal to grant clemency did not give proper consideration to their appeals.

Three other inmates—Mary Jane Viesta Veloso of the Philippines, Serge Areski Atlaoui of France and Martin Anderson of Ghana—are awaiting process of their judicial reviews to the Supreme Court, while an appeal from Indonesian Zainal Abidin has been rejected.

All but Veloso have been moved to the prison island of Nusakambangan, off the southern coast of main Java where they will be executed. The only woman is still being held in Wirogunan prison in Central Java town of Sleman.