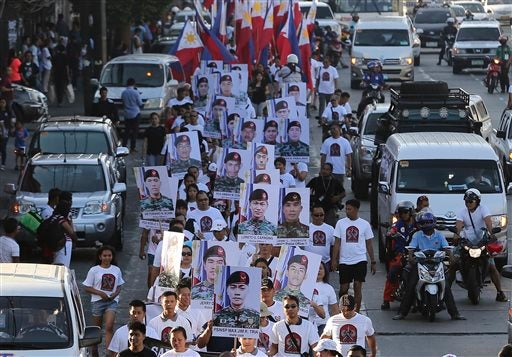 In this Sunday March 8, 2015, file photo, family and supporters march as they hold some of the pictures of the 44 police commandos killed during a recent operation against Southeast Asia’s top terrorist suspect Malaysian Zulkifli bin Hir, also known as Marwan, as they join a “Sympathy Walk” in suburban Quezon city, north of Manila, Philippines. AP

MANILA, Philippines — American involvement in a recent Philippine assault that is believed to have killed a top Southeast Asian terror suspect but left scores of Filipino commandos dead is a bittersweet finale to a decade-long U.S. battle against terrorism in the country’s south.

The U.S.-backed Philippine police commando raid on Jan. 25 reportedly killed long-wanted Malaysian militant Zulkifli Bin Hir in the marshy outskirts of Mamasapano town. A month later, the American military deactivated an anti-terror task force that oversaw what has been seen as a relatively successful 13-year American battle against terrorism in the southern Philippines.

A smaller U.S. military contingent remains in the restive region.

A Philippine Senate investigation report on the bloody anti-terror assault, which was made public on Tuesday, provided details on the extent of America’s behind-the-scenes involvement in the raid, including how six U.S. personnel joined a battle-monitoring post manned by Filipino police generals. The Americans provided intelligence, combat training, maps, equipment and surveillance that could be viewed on TV sets, according to the report.

One of the Americans reportedly ordered a military general at one point to fire artillery to support the embattled commandos but the Filipino commander refused to do so in disgust, said the report, without identifying the American or his unit.

“Do not dictate to me what to do. I am the commander here!” the Senate report quoted the general, identified as Philippine army Maj. Gen. Edmundo Pangilinan, as saying.

The U.S. Embassy did not immediately comment on the Senate report, which said there was a need to review defense ties between the Philippines and its treaty ally, the United States, including their alliance in the battle against terrorism.

“Are there any consequences to working with the United States in pursuing its global war on terror?” the report asked. “Obviously, in the Mamasapano operation, the consequence of that mission … was the death of a large number of Filipino soldiers and civilians.”

U.S. forces are prohibited from local combat under the constitution in this former American colony. There has been no evidence that the Americans violated the terms of their presence, including in their involvement in the top-secret police assault, under a security pact that allows U.S. forces to train, advise and assist Filipino forces battling al-Qaida-linked militants.

Still, the deaths of 44 police commandos overshadowed the reported killing of bin Hir, also known as Marwan, who was one of three high-profile targets in the January anti-terror assault.

The commandos reportedly killed Marwan in a hut after a gunbattle. Unable to carry his body during a clash, they chopped off his right index finger and took photos of his body as evidence of his death. As the elite police forces withdrew from the hinterland and daybreak lifted their night cover, they became entangled in gunbattles with different Muslim rebel groups, Philippine officials said.

The dead included the 44 commandos and 18 insurgents from a Moro rebel group that signed a peace deal with the government last year. The Moro rebels said the firefight was a “misencounter” because the policemen had failed to coordinate the anti-terror raid with them, but the large number of police casualties nevertheless provoked public disapproval and stalled the peace deal.

President Benigno Aquino III came under criticism for allowing a national police chief suspended by an anti-graft court to become involved in supervision of the police assault while other top security officials were kept in the dark about the major assault.

An FBI DNA test has indicated that the militant killed was Marwan, who had been on Washington’s list of most-wanted terrorists and had long been a high-priority target for American counterterrorism forces in the southern Philippines.

But there have been no triumphant exultations amid the heavy police loss.

Last month, when the U.S. military deactivated its Joint Special Operations Task Force-Philippines, which had provided counterterrorism training and support to Filipino forces in the south since 2002, an American commander cited the stronger security alliance between Manila and Washington that has been tested in the battle against terrorism.

The alliance has been credited for crippling the Abu Sayyaf, a small but brutal group notorious for ransom kidnappings, beheadings and bombings in its heyday. At least 17 American military personnel and many more Filipino troops perished in terror attacks and accidents in the south.

“Through many successes and some occasional setbacks, our partnership has grown stronger and deeper over the years,” U.S. Army Col. Erik Brown was cited by the Philippine military as saying as he led a ceremony to encase the American task force’s symbolic flag in a southern Philippine military camp.
RELATED STORIES

Escudero tells Duque: ‘Please just do your job without fooling yourself or us’

After talking tough vs China, US conducts freedom of navigation operation in Spratlys