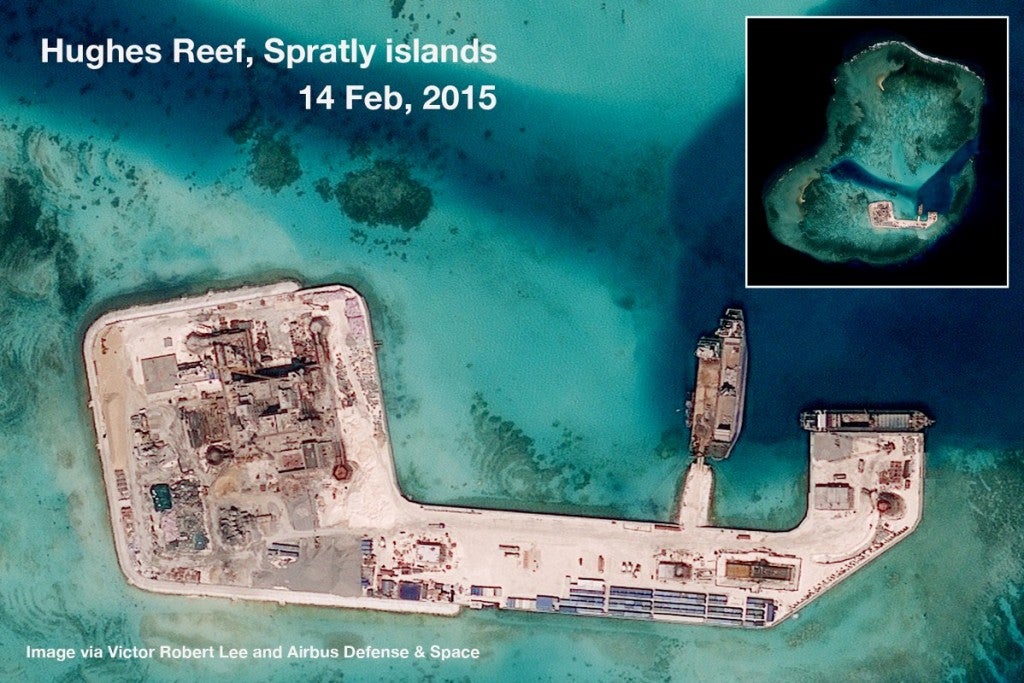 MANILA, Philippines–The Philippines submitted last Monday to a United Nations tribunal supplemental evidence for its arbitration case against China over disputed territories in the South China Sea, the Department of Foreign Affairs (DFA) said on Tuesday.

The submission, which came to more than 3,000 pages, also mentioned China’s continued and massive reclamation activities in the areas claimed by the Philippines, though not in very great detail, said DFA spokesman Charles Jose.

He said this was because the supplemental submission was more in response to the 26 questions that the UN arbitration tribunal sent the government last Dec. 16 asking that it be provided with “additional arguments and information”.

“The questions relate to issues concerning both the tribunal’s jurisdiction and the merits of the Philippines’ claims, including the Philippines’ principled claim challenging the lawfulness of China’s so-called nine-dash line.”

Jose said the supplemental submission was the last written submission that the Philippines will give the UN tribunal, which will likely ask China to respond. He said the tribunal can then ask for oral arguments in July and then decide on the case in early 2016.

The Philippines last year submitted a 4,000-page memorial to the UN tribunal challenging China’s nine-dash line claim to almost the entire South China Sea region, which include the Philippines’ maritime claims under the UN Convention on the Law of the Sea (Unclos).

Of the 12 volumes submitted to the UN tribunal, volume 1 consists of 200 pages of written argument and volume 2 consists of a 200-page atlas containing detailed information about 49 islands, reefs and other features in the South China Sea, according to Jose.

China has refused to take part in the tribunal’s proceedings but has come out with a position paper stating that the UN arbitration body had no jurisdiction over the Philippine case.

The supplemental submission comes at a time when the Philippine government has been trying to bring to the attention of the international community China’s unremitting reclamation activities in the disputed South China Sea region.

Jose reiterated on Tuesday the Philippine concern that the Chinese reclamation activities were meant to “alter the conditions on the ground and change the status quo” and thus “adversely affect our arbitration case”.

“It will be good if the tribunal can look at the features themselves and see what were the original features, and what happened after the reclamation,” Jose told reporters.

According to Jose, one of the 26 questions asked by the tribunal was concerning Vietnam’s statement of support for the Philippine case against China.

Vietnam, which is in dispute with China over Paracel island chain, said last December that the UN tribunal has jurisdiction to settle disputes concerning Unclos interpretation. It also asked the tribunal to look into the legal rights and claims of Vietnam in the disputed waters.

Jose said the Philippines told the UN tribunal that Vietnam’s position was “helpful to our case and supports our claim that China’s indisputable sovereignty is without basis in Unclos.”

Jose also commended the UN tribunal for “the evident care and attention” it was giving to the Philippine case given the scope and detail of its questions.

Read Next
4 Aeta women go to India, back as solar engineers
EDITORS' PICK
Smart poised to turn PH into ‘Smart 5G country’ with nationwide rollout
Full operation of more sectors, businesses pressed to spur economy
New Vatican ambassador to PH named
Water remains our saving grace right now
We don’t want gov’t to fail, because it’s all of us who will suffer and die — Robredo
Get 80% OFF Ignite 2020 Cyber Tickets starting 28 September
MOST READ
Fernandez: Velasco camp ‘betrayal’ pushes call to retain Cayetano as Speaker
Palace: Some cities in Metro Manila eligible for MGCQ
Mayor Treñas tells Locsin: Iloilo City is much better than what you think
Duterte not keen on extending term — Palace
Don't miss out on the latest news and information.