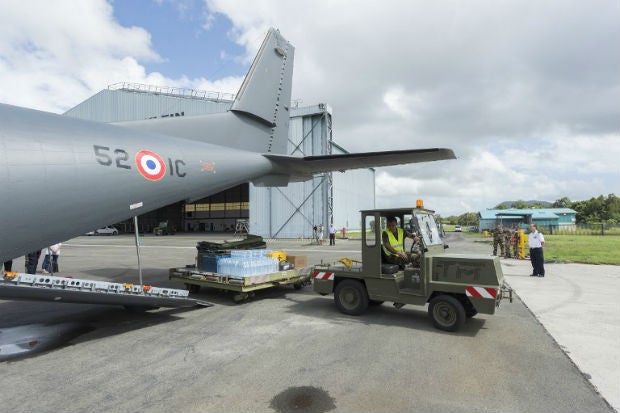 A private load water bottles into a French Army logistical transport plane bound for Vanuatu, transporting food, water and relief, at the Aerial Military Base Lieutenant Paul Klein (formerly known as La Tontouta), north of Noumea, New Caledonia, on March 15, 2015. Cyclone-devastated Vanuatu declared a state of emergency on March 15 as relief agencies scrambled to get help to the Pacific nation amid reports entire villages were “blown away” after being hammered by Super Cyclone Pam. AFP

SUVA, Fiji — Aid agencies Monday described conditions in cyclone-ravaged Vanuatu as among the most challenging they have ever faced, as the Pacific nation’s president blamed climate change for worsening the devastation.

Relief flights have begun arriving in the battered capital Port Vila after Super Tropical Cyclone Pam tore through on Friday night packing wind gusts of up to 320 kilometers (200 miles) an hour.

But workers on the ground said there was no way to distribute desperately needed supplies across the archipelago’s 80 islands, warning it would take days to reach remote villages flattened by the monster storm.

Save the Children’s Vanuatu director Tom Skirrow told AFP the logistical challenges were even worse than Super Typhoon Haiyan, which struck the Philippines in November 2013, killing more than 7,350 people and ravaging an area a big as Portugal.

“I was present for the Haiyan response and I would 100 percent tell you that this is a much more difficult logistical problem,” he said.

“The numbers are smaller but the percentage of the population that’s been affected is much bigger.”

The official death toll in Port Vila stands at six with more than 30 injured, although experts believe this is a likely fraction of the fatalities caused by the storm.

CARE International spokesman Tom Perry said flying into the capital, where up to 90 percent of homes have been damaged, was “startling.”

“It’s been flattened, all that green is basically horizontal, trees are just kind of standing like broken toothpicks, it’s quite startling… it’s hard to find a home that hasn’t been hit,” he told the Australian Broadcasting Corporation.

Skirrow said 15,000 people were homeless in Port Vila alone and flights over remote islands had confirmed widespread destruction elsewhere in the impoverished nation of 270,000.

“It’s frustrating, we’re still stuck in a small part of Port Vila, we can’t even get to the north of this island (Efate) to find out what’s going on,” he said.

“We’ve had aerial surveillance (of the outer islands)… all we can tell is what we suspected, that everything’s destroyed, but we don’t know what’s happening with the people right now,” he said.

“I am absolutely sure that there will be at least 150,000 people significantly affected, most likely homeless, and about 75,000 of them will be children.”

He said aid agencies were preparing supplies but it would likely be three days before airfields in remote islands were cleared.

Pacific nations regard themselves as at the frontline of climate change, given many are low-lying islands dangerously exposed to rising sea levels, and Vanuatu President Baldwin Lonsdale said changing weather patterns were partly to blame for the destruction.

“Climate change is contributing to the disaster in Vanuatu,” he said in comments carried on Australian television ahead of his departure from Japan, where was attending a UN disaster meeting, to Sydney en-route to his homeland.

“We see the level of sea rise, changing weather patterns, all these things are happening everywhere.

“This year we have had more (rain) than other years and for the last couple of weeks, the heavy rain has exceeded what has happened in the past.”

Communications were still down across most of the islands, although the airport in Port Vila was scheduled to re-open to commercial flights on Monday.

Military planes from Australia, New Zealand and France were arriving loaded full of food, shelter, medicine and generators, along with disaster relief teams.

“When you mount a response you have to do it fast because you have to be able to save lives immediately and if you can’t do it fast there’s going to be significant loss of life,” Skirrow of Save the Children said.

“Deaths don’t just happen on the night the cyclone hits, you’re going to have kids with diarrhea, potentially with diseases like measles if they’re stuck in an evacuation center,” he said.

The United Nations Office for the Coordination of Humanitarian Affairs said the cyclone, which was the maximum category five when it hit, had affected countries across the South Pacific.

“At least nine nations have experienced some level of devastation including Vanuatu, Solomon Islands, Kiribati, Fiji, Tuvalu, and Papua New Guinea,” it said.

The UN had unconfirmed reports that the cyclone had killed 44 people in one province alone on Vanuatu, and Oxfam said the destruction in Port Vila was massive.