MANILA, Philippines–When the Vatican decree declaring Father Al a person of “heroic virtue” was read on Friday by Gaudencio Cardinal Rosales in Silang, Cavite province, a few hundred meters from his burial site, there was a momentary silence among the thousands gathered in the Girlstown complex for the thanksgiving Mass, and then a rousing applause.

The late diocesan priest Aloysius Schwartz, who began his missionary work in Korea in 1957 and died in Manila in 1992, surmounted extraordinary difficulties to help poor and abandoned children, founded two religious congregations and started Boystowns and Girlstowns in three countries.

After his death, “Children’s Villages” committed to the comprehensive education of poor but qualified students were started in three more countries.

On Jan. 22, three days after Pope Francis returned to Rome from his visit to the Philippines, the cause for Schwartz’s canonization took a dramatic step forward. The Pope confirmed the declaration naming Father Al “venerable”—the next step before beatification.

Schwartz’s was one of 11 causes for canonization Pope Francis advanced that day.

The Mass in Silang, with Luis Antonio Cardinal Tagle as main celebrant, was attended by thousands of students and alumni of the Boystown/Girlstown programs, including dozens from Korea, members of the Sisters of Mary and the Brothers of Christ religious orders, and hundreds of friends, supporters and benefactors.

The Vatican proclamation which Rosales read at the start of the Mass began with a quote from Schwartz: “To serve the poor in the name of Christ is not a game. It is not play-acting, nor is it child’s play. It means constant pain, discomfort, humiliation, suffering and sacrifice. In a word, it means the Cross.”

For Schwartz—an American who studied theology in Belgium for four years, worked in Korea for a quarter-century and lived in the Philippines for seven years until his death—these were no idle words.

His work among the poorest of the poor encouraged him to live like the poor. His coworkers testified to the simplicity of the lifestyle of the man they call the “father of the poor.” For almost five years, he even lived in a rat-infested, unventilated shack in Busan, Korea.

In 1989, he was diagnosed with amyotrophic lateral sclerosis (Lou Gehrig’s disease), which eventually immobilized him. But he continued with his work, even traveling to Mexico in October 1991 for the inauguration of the Boystown/Girlstown program there.

Sister Michaela of the Sisters of Mary wrote down her memory of those final years: “He has shown us the example of radiating smiles, joy and sharing peace, even if one is confined to a wheelchair and is suffering a distressing illness. On his deathbed, while slowly breathing his last, he was emitting the goodness and holiness of Christ.” 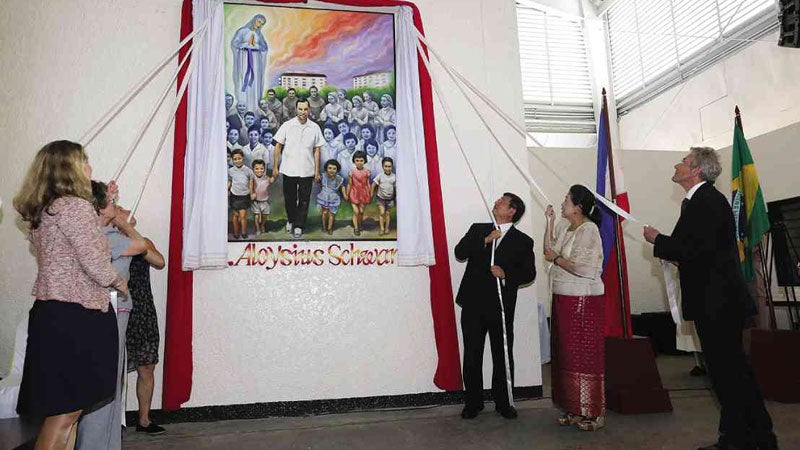 In a presentation before the thanksgiving Mass, the postulator-general who advanced Schwartz’s cause in Rome, Fr. Samson Silloriquez of the Augustinian Recollects, explained how the cause was promoted.

He noted more than once that Schwartz had faced great resistance from his Korean bishops. He shared a quote from Schwartz onscreen:

“After that, he and his successors, on various occasions and at various times tried—one, to have me thrown out of the diocese; two, to have me deported from Korea; three, to have me suspended as a priest; four, to sabotage my efforts to raise funds overseas for the poor; and five, to close down and destroy the Sisters of Mary, the Boystown and Girlstown, and all my other works of charity.

“The fact that their desires were thwarted is a tribute to the grace and mercy of God.”

Even in the Philippines, not everyone in the hierarchy was drawn to his appeal.

Silloriquez noted that, during the consultation with the Philippine bishops, a necessary step in the canonization process for a candidate who died in the Philippines, three of the 45 bishops consulted did not give their “nihil obstat” (or declaration of no objection).

In Silloriquez’s phrasing: “45 bishops consulted, three were against.” In the postulator’s recollection, one of those who voted against the proposal to promote Schwartz’s canonization even wondered whether the Church had already too many saints.

Resistance from within the Church to radical or reformist religious is a familiar theme in the narratives of the saints, with the letters of Catherine of Siena and the volumes of Teresa of Avila among the richest, most detailed sources.

Silloriquez summarized the factors that can lead to canonization. “So, two possibilities: Purity of life and martyrdom in defense of faith.” He emphasized that the fame of sanctity “must be spontaneous and not artificially procured, stable, diffused and alive among a certain group of faithful.”

He also noted that, once the “positio” of a cause was completed (this is the brief that argues that a candidate “practiced the virtues in a heroic manner”), it would usually take 10, 15 or 20 years before the Congregation for the Causes of Saints issues a declaration.

But Tagle, Silloriquez and three nuns from the Sisters of Mary met with Angelo Cardinal Amato, the prefect of the congregation, on Oct. 6, 2012, to submit the positio.

The theologians commissioned by the congregation to review the positio gave their unanimous approval on March 6, 2014. Less than a year later, on Dec. 16, 2014, “the bishops and the cardinals gave their approval,” Silloriquez said. “We waited only one year.”

And seven weeks after the Pope’s own approval, the proclamation was read aloud, on the very grounds where Aloysius Schwartz, now venerable, had chosen for his burial site.

Sisters of Mary to hold tribute concert for Fr. Al