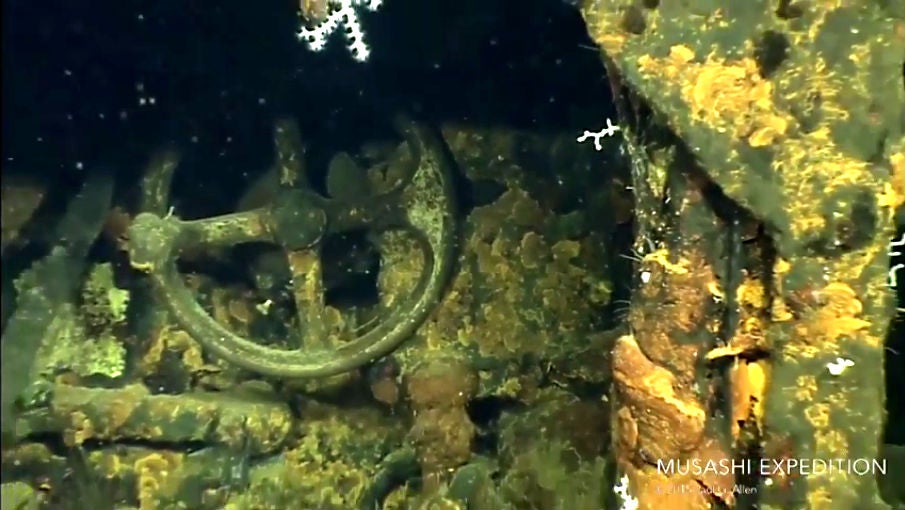 TOKYO—Debris scattered over a large area at the bottom of the sea in the Philippines indicate that the massive Japanese World War II battleship  Musashi  was blown up into pieces in an undersea explosion 70 years ago.

Experts from a research team analyzing a live feed from an unmanned underwater probe Friday said they believe the  Musashi  suffered at least one explosion while descending in the 1,000-meter (3,280.84-foot) deep sea. Except for an initial series of partial photos and images of the ship, Friday’s more than 2 ½ hour feed was the first detailed images showing the current status of the ship.

The  Musashi  sank in October 1944 in the Sibuyan Sea during the battle of Leyte, losing half of its 2,400 crew. It was last seen disappearing into the water in one piece.

Back Story: US billionaire finds Japan’s famed battleship in PH

“The wreck is actually very damaged,” said David Mearns, a marine scientist on the  Musashi  research team. “It appears she suffered at least one, if not two, magazine explosions which would have sheered off the bow and the stern, and its entire middle section of its super-structure.”

The footage showed sections of the ship that used to be an air-combat platform. The debris scattered in areas approximately 800 meters (2,600 feet) by 500 meters (1,640 feet), according to the research team.

The feed also showed holes in the bow area, apparently made by U.S. torpedo attacks before theMusashi  sank, a torn off propeller, as well as gun turrets and catapults that were broken off. The ship’s stern as upside down.

The research team, sponsored by Microsoft co-founder and entrepreneur Paul Allen, was the first to successfully locate the ship, just ahead of the 70th anniversary of the war’s end later this year.