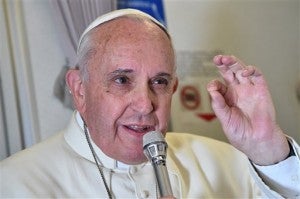 MANILA, Philippines–Pope Francis has urged the faithful to give importance to the elderly in the family even as he recalled how Filipinos fondly called him “Lolo Kiko” during his visit to the Philippines almost two months ago.

“Lolo” is the Tagalog word for grandfather and Kiko is the common Filipino nickname for Francis.

According to the Catholic Bishops’ Conference of the Philippines website, Pope Francis, during his general audience at St. Peter’s Basilica in Vatican City on Wednesday, urged the crowd to shun the current throwaway culture by listening to the older generations.

“When I was in the Philippines, the Filipino people greeted me, saying, ‘Lolo Kiko,’ meaning Grandpa Francis. ‘Lolo Kiko,’ they said. The first important thing to stress: It is true that society tends to throw us away, but the Lord definitely does not! The Lord never throws us away,” the Pope said.

“(The Lord) calls us to follow Him in every age of life, and old age has a grace and a mission too, a true vocation from the Lord. Old age is a vocation,” he said.

The Holy Father said a grandparent’s words are very important because they can serve as a helpful guide for younger people.

Pope Francis told the faithful how much he treasures a letter his grandmother wrote him on the day of his ordination, which he keeps in his breviary because “it does him good.”

He also said the prayers of the older people are “a great gift” for the families and for the Church and they offer “a great infusion of wisdom for all of society, too, especially for (those who are) too busy, too occupied, too distracted.”

“In prayer, they thank the Lord for His blessings, otherwise so often unacknowledged; they intercede for the hopes and needs of the young. They lift up to God the memory and sacrifices of past generations,” Pope Francis said.