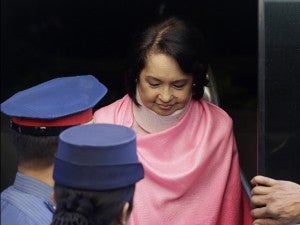 “[T]he case is now confidential. The confidentiality rule is part of a normal process adopted by the UN Special Procedures mechanisms in order to protect all parties,” said the statement issued by the secretariat of the WGAD, which is an independent body under the UN Human Rights Council.

The UN Information Center in Manila clarified that contrary to some media reports, the case had not been filed with the UN Human Rights Committee which is the individual complaints mechanism under the Optional Protocol of the International Covenant on Civil and Political Rights.

“Please note that this case is not being handled by the UN in the country. All is being done through the Working Group on Arbitrary Detention,” it said.

Aquino government officials have criticized Clooney for taking on Arroyo’s case. The human rights lawyer, who is the wife of Hollywood actor George Clooney, was quoted as saying that Arroyo’s detention at the Veterans Memorial Medical Center (VMMC) in Quezon City on plunder charges was a violation of human rights.

She has also asked the Aquino government to issue a public apology to the former president who is now a congresswoman for Pampanga.

Arroyo, who is suffering from a rare bone disease, is under hospital arrest at the VMMC on plunder charges for allegedly misusing the P366-million Philippine Charity Sweepstakes Office intelligence fund.

The Karapatan human rights group, meanwhile, has expressed to the WGAD its “grave concern” over Clooney’s taking on the case of Arroyo.

In a March 10 letter to WGAD, Karapatan said Clooney was “misinformed,” and warned the UN body against “the selfish tricks of oppressive and megalomaniac presidents.”

“It is truly ironic that Ms. Arroyo would speak of civil and political rights, when her administration is considered as among the most repressive regimes in the Philippines,” said the letter signed by Cristina Palabay, the Karapatan secretary general.

It said Arroyo was enjoying “the most special treatment” for a detained person in the Philippines.

“For the [WGAD’s] information, she is currently detained in a hospital suite, a far cry from the detention facilities of political prisoners and common offenders in the Philippines who are in box-like prison cells,” said the letter.

Karapatan called the attention of the UN body to the complaints it had filed before it on alleged violations, particularly cases of arbitrary arrests and detention, of the Arroyo administration.

It claimed to have documented 1,206 victims of extrajudicial killings, 206 victims of enforced disappearances, and more than 2,000 cases of illegal arrests during the Arroyo administration.

It also cited a report written in 2008 by Philip Alston, the then UN special rapporteur on extrajudicial, summary or arbitrary executions, pinning responsibility for human rights violations on the Arroyo government.

Other human rights advocates in the country just shrugged off Arroyo’s suit at the UN.

“It is the right of everybody to be able to appeal to the UN body, and any venue for redress. Any citizen can do that,” said Max de Mesa, chair of the Philippine Alliance of Humans Rights Advocates.

“But I’m sure the UN will ask if all local and national remedies have been exhausted before they accept that [complaint]. And there is an ongoing case,” De Mesa said.–With Jovic Yee