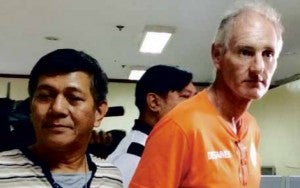 CHILD ABUSERS A government investigator leads away a cuffed Peter Gerard Scully (top photo) who
was arrested for producing pornographic videos that showed toddlers and children being sexually
assaulted and tortured by his live-in partner, “Lovely.” CONTRIBUTED PHOTO

MANILA, Philippines—Philippine prosecutors said Thursday they will file human trafficking, statutory rape and murder charges against an Australian man who allegedly sexually assaulted babies and children as part of a booming cyber-sex trade.

The suspect, Gerard Peter Scully, 51, was arrested in the southern Philippines city of Malaybalay last month after allegedly sexually abusing at least eight girls, including an 18-month-old infant.

He also allegedly strangled one of the girls to death, with her skeleton later discovered buried under a house he had rented, investigators said.

The Australian will also be charged with violating the Philippines’ cybercrime laws.

A complaint, filed by Justice Department investigators with the prosecutors’ office, said Scully forced the girls to perform sexual acts in front of a video camera for paying clients overseas.

“Let notice be served to these criminal elements that the days of their child cybersex operations are numbered,” Justice Secretary Leila de Lima said in a statement on the case.

“Wherever these syndicates are, we will hunt them down and we will bring them to justice.”

In the complaint outlining the case against Scully, a 13-year-old girl was quoted as saying that her impoverished family agreed she could do domestic work at his home in 2012.

But she was instead forced to perform sex acts with other girls, and was beaten by Scully’s Filipina girlfriend when she refused, according to the prosectors’ complaint.

“They told me they had to take pictures of me naked because there was an American who really wanted to see me naked… and because the American will pay a large amount,” the complaint quoted her as saying.

The girl said she fled Scully’s house after she learned he had sold her to a German national who was coming to collect her, the complaint said.

The head of the anti-human trafficking division of the justice department’s investigating arm, Eric Nuqui, said that Scully had been the subject of an international probe after Netherlands police found out about his activities.

If convicted, the Australian could face life in prison.

Authorities have warned the Philippines is a major hub of a billion-dollar global child cybersex industry, with operators aided by widespread poverty and legal loopholes that allow them to remain anonymous.

Last year, de Lima said that online child abuse was the leading cyber-related crime in the Philippines, making up 46 percent of the more than 200 cases being handled by law-enforcement agencies.