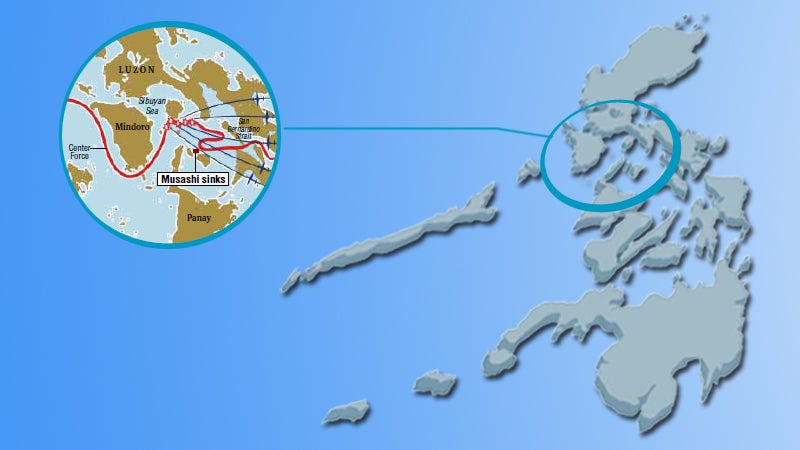 Map shows how the Musashi battleship succumbed to US air attacks in the Sibuyan Sea where the Japanese lost three other warships. To escape further damage, the Center Force turned east and slipped through the unguarded San Bernardino Strait. SOURCE: FROM THE BOOK “RETURN TOTHE PHILIPPINES” BY RAFAEL STEINBERG

SAN PEDRO CITY, Philippines—The discovery of the wreckage of the Japanese battleship Musashi came as a welcome surprise to residents of Sibuyan island.

Ronnie Royo, a resident and member of a local group called the Truth Team, said he had heard of an “exploration” that had been going around since late 2014.

“We were just wondering because the fishermen here said they didn’t actually see any explorers out in the sea or even that yellow submarine,” he said.

“We were surprised too when we learned about it on the Internet,” he said in a phone interview on Wednesday.

The Truth Team is a group founded by Rene Maglaya, a former director of the Department of the Interior and Local Government, who hails from Magdiwang, one of the three towns in Sibuyan, an island of Romblon province.

Over the past three years, the Truth Team and Sibuyan residents have been commemorating the Battle of Sibuyan every Oct. 24. On this date, members of the Philippine Coast Guard and some local civic groups usually go out into the Sibuyan Sea to offer flowers as part of the program.

The group is also pushing for the transfer of a historical Sibuyan battle marker from Alcantara town, on Tablas island, to Sibuyan island.

To environmentalist Rodne Galicha, executive director of the environmental advocacy group Bayay Sibuyanon, the discovery was a “welcome surprise.”

“We ourselves only learned about it through Twitter,” he said in a separate phone interview.

Galicha said he “hopes the explorers have properly informed” national and local government agencies about the exploration.

“It’s like hunting for a national treasure,” he said. “It is really significant to the history of Sibuyan,” he said.

The Inquirer tried to seek comments from Romblon Gov. Eduardo Firmalo but learned that he was out of the country.