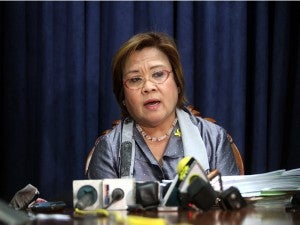 MANILA, Philippines–The Philippines has launched a war against an international syndicate that uses Filipino children from 1 to 12 years old to serve the sexual needs of its clients in foreign countries.

At the helm of the campaign against the child traffickers are the Department of Justice (DOJ) and the National Bureau of Investigation.

The victims are children from cities and towns in southern Mindanao who are portrayed on videos to cater to pedophiles in several foreign countries, including Brazil, Germany, the Netherlands and Australia.

“We are waging war against these child traffickers,” Justice Secretary Leila de Lima told the Inquirer. “With the cooperation of our international counterparts, we could track down the ‘secret society’ that financed the production of such videos.”

De Lima said that based on the information received by the NBI, some of the members of the so-called secret society had sent money to Dutch national Peter Gerald Scully and his former live-in Filipino partner identified by the NBI Anti-Human Trafficking Division (Ahtrad) simply as “Lovely.”

Now in government custody, they are accused of producing sex films for viewing by members of the “society” only.

The information about the production of child pornography films—which include torturing of young girls—was obtained by Ahtrad executive officer Janet Francisco last year from the bureau’s foreign counterparts, according to NBI Director Virgilio Mendez.

Francisco attended an Interpol seminar on antihuman trafficking in Bermuda where she was given by Dutch authorities a case folder on the sex trafficking operation, Mendez said.

“They were able to trace the origin of the video because of the appearance of and the dialect used by the participants in the video,” Francisco said.

She said the case folder contained photos of the unidentified young victims as well as the window and interior of a house where the abuses and sexual assaults were supposedly committed.

“The cruelty is so shocking that other operatives fighting against child abuse and cruelty have come together,” said senior NBI agent Roy Zuñiga, a veteran investigator of human trafficking and the officer on case.

Despite the scant information, the Ahtrad team based in Manila, led by Cesar Nuqui, and the NBI Northern Mindanao team headed by Lito Magno “literally” combed the streets and schools of Cagayan de Oro City, found the victims, rescued them and brought them to the Department of Social Welfare and Development (DSWD).

Zuñiga said a breakthrough in the case occurred when the operatives succeeded in tracing and talking to a victim-turned-recruiter, who is now in jail.

“It was this witness who gave the names of the faces on the video, including the real name of Lovely,” the NBI official said.

Lovely was apprehended at the airport while about to board a plane to Cagayan de Oro from Palawan province, where she had spent her honeymoon with her new husband, a French national.

The witness, who was 14 years old when she got involved with Scully and Lovely, said that after she served as a “model” on the videos, she recruited other girls to participate in sexual acts on the orders of the couple.

She told the Inquirer that Scully and Lovely paid her P500 for every session that sometimes lasted for two hours.

Scully, who was arrested in a safe house in Malaybalay City in Bukidnon province last week, is now detained at the NBI jail.

Lovely, whose real name has not been disclosed, is now cooperating in the investigation, the NBI said.

Her statements led to the discovery of the remains of “Barbie,” one of the victims of the group, who was buried under a house in Villa Corito, Surigao City, that Scully previously rented.

The NBI said that based on Lovely’s statements, the 12-year-old Barbie was also tortured and forced to perform sexual acts on video.

The NBI is set to file qualified trafficking and murder charges against Scully. Both are nonbailable offenses.