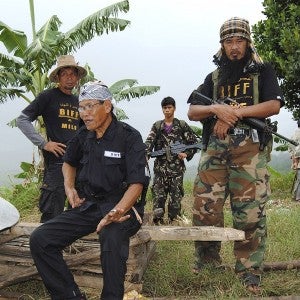 Ameril Umbra Kato, seated, the founding commander of the Bangsamoro Islamic Freedom Fighters, is interviewed by the media inside his rebel stronghold in Maguindanao in 2011. At that time, the BIFF was said to be harboring Zulkifli bin Hir, alias Marwan, a member of the Southeast Asian terror group Jemaah Islamiyah. AP FILE PHOTO

CAMP SIONGCO, Maguindanao—Four Indonesian terrorists and an Arab are reportedly hiding here and are being provided sanctuary by the Bangsamoro Islamic Freedom Fighters (BIFF), the Army division commander in the area said on Saturday.

Maj. Gen. Edmundo Pangilinan, 6th Infantry Division commander, said the four Indonesians and the Arab, who was identified as a chemist, have been hiding in the so-called SPMS complex.

After his meeting with Maguindanao Gov. Esmael Mangudadatu, Pangilinan, citing Army intelligence reports, told reporters the foreign nationals were monitored to be moving around the “SPMS box” with BIFF forces and Filipino bomber Basit Usman.

Pangilinan said the recent clashes between the BIFF and the military showed that the bandits had been employing “young warriors” under 15.

He also revealed that Usman was recently sighted in a Madrasah school teaching children Islamic radicalism.

“There are no Indonesian or Arabian nationals in our group. We are purely native Maguindanaos and willing to die fighting. We do not need imports like the PBA (Philippine Basketball Association) does,” Abu Misri Mama, speaking for the BIFF, said in Filipino.

“The Army is making up stories. They talk more but they cannot get at us,” Mama said in a phone interview.–Edwin Fernandez, Inquirer Mindanao