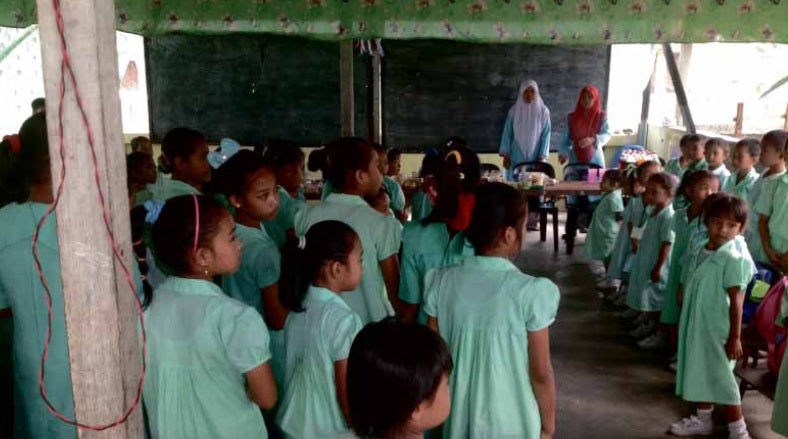 OUT OF THE BOX   Children of undocumented Filipinos learn the 3 R’s as well as other basic skills at Stairway to Hope Learning Center at Kota Kinabalu, Sabah, an alternative learning center built through the joint effort of volunteers from the Filipino community and the Philippine Embassy in Malaysia. CONTRIBUTED PHOTO

MANILA, Philippines–It seems strange to hear the “Lupang Hinirang” being sung in Sabah, the state in East Malaysia to which the Philippines has a longstanding claim on behalf of the Sultanate of Sulu.

The Philippine national anthem is being heartily sung by children of undocumented Filipinos in the disputed territory who are given free education, thanks to volunteers from the Filipino community there and the drive of the Philippine Embassy in Malaysia.

Stairway to Hope Learning Center in the capital of Kota Kinabalu is one of six alternative learning centers (ALCs) in Sabah where more than 2,000 children of undocumented Filipinos are enrolled.

Besides the Philippine national anthem, the children at the ALCs are taught “reading, arithmetic, Bahasa and like skills,” according to Philippine Ambassador to Malaysia Eduardo Malaya.

Malaya said the ALCs were put up by members of the Filipino community in Malaysia, with the embassy’s encouragement, in response to the “rampant illiteracy” of thousands of Filipino children in Sabah who had no access to public schools because of the irregular status of their parents.

Under Malaysian laws, access to local public schools extends only to those possessing Malaysian citizenship.

Malaya said the parents of undocumented Filipinos could not afford to send their children to private schools. A way had to be found for education to be provided to these children who had nowhere to go but the streets, he said.

“These children, mostly Muslim Filipinos, would often be found in public markets in the large towns or in oil palm plantations in the interior of Sabah, loitering around or doing menial jobs,” Malaya said.

There are now six ALCs serving some 2,200 school-age children in the Sabah capital and the municipalities of Keningau, Lahad Datu, Semporna and Sandakan.

The ALCs are run and staffed by volunteer teachers—Filipinos and Sabahans—who receive no compensation. Most of the volunteers are the parents themselves who care about the future of their kids, Malaya said.

The centers are being financed through donations from “kind-hearted individuals and some corporations.”

The challenges faced by the ALCs are “tremendous,” Malaya said.

“There is lack of almost everything that normal schools and pupils often take for granted—teachers who are qualified to teach, comfortable classrooms, proper school facilities, school supplies, adequate operating expenses,” he said.

It is a “miracle” that these centers are still running, the ambassador said.

“It is the volunteers’ resourcefulness and commitment to the children’s future that keep them going,” he said.

Malaya said the Philippine government was committed to providing this kind of alternative education to Filipino children in Sabah.

The education intervention program for the Filipino children in Sabah is the first such program undertaken by the government. 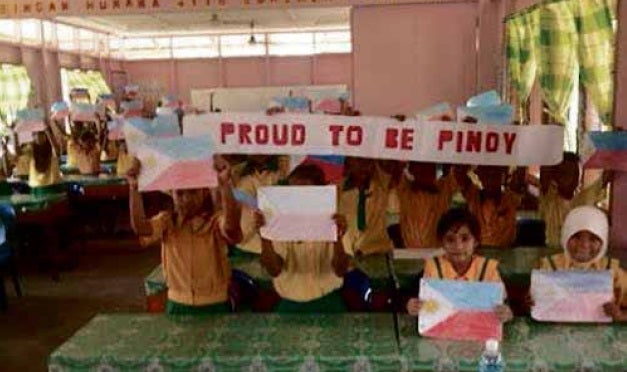 Some 2,200 children are recipients of free education from six centers that thrive through individual and corporate donations. CONTRIBUTED PHOTO

In February 2014, during the visit of President Aquino to Kuala Lumpur, the Philippines and Malaysia signed a memorandum of understanding on cooperation in education.

“The Philippine side has indicated that it wishes to give priority to alternative education in the implementation of the agreement,” Malaya said.

Malaya said the hope was to see more ALCs put up in Sabah, as well as for the government to work out “an appropriate recognition and accreditation of the ALCs by the Malaysian authorities in the near future.”

Last November, “at the urging of the embassy,” the Department of Education (DepEd) and the Commission on Filipinos Overseas (CFO) conducted a two-week capability workshop in Kota Kinabalu to “raise the competency of some 65 volunteer teachers,” Malaya said.

Malaya recalled that when he first visited Stairway to Hope two years ago he found the children there to be shy. But after six months of basic literacy, he could see the children had gained much confidence. He credited those running the school, led by Marilou Salgatar-Chin, for this.

“For many of us, the issue is beyond politics. It is humanitarian, it is about children and the imperative to provide them a future brighter than the bleak one they face in the future,” Malaya said.

The ambassador said he never thought of focusing on education as a diplomat, but now he was glad that he did.