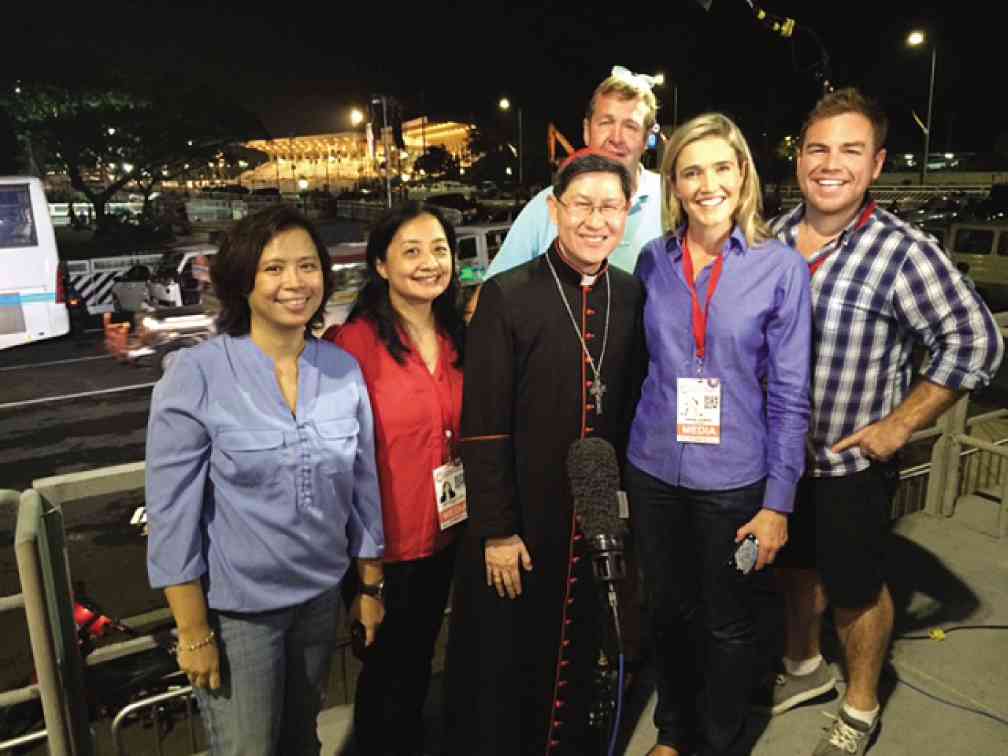 ‘THERE’S NOW JURISPRUDENCE TV producer Arlene Espiritu (left) poses with the CNN International Team and Manila Archbishop Luis Antonio Cardinal Tagle during the papal visit in January. She has been ordered reinstated by the Supreme Court. The high court ruled that her termination due to illness was invalid and ordered Fuji TV Network Inc. to pay her back wages. CONTRIBUTED PHOTO

MANILA, Philippines–While fighting cancer, journalist Arlene Espiritu has finally conquered a burdensome legal battle and has some peace of mind.

Espiritu found herself sobbing last week when she read how the Supreme Court upheld a lower court decision that her former employer, the Manila bureau of Japanese television network Fuji, illegally terminated her as news producer in 2009 for having lung cancer.

“Here, when people see or when an employer learns that you have cancer, they’d say you could no longer work, that you’re high-cost, high-risk. But after this ruling, no one would even dare do this anymore,” said the 44-year-old, who was diagnosed with lung cancer six years ago.

Written by Associate Justice Marvic Leonen, the ruling of the Supreme Court’s Second Division affirmed the Court of Appeals’ (CA) June 25, 2012, decision that deemed illegal Fuji’s termination of Espiritu on account of her illness.

Fuji had elevated the case to the Supreme Court in appeal to the CA ruling, which in turn had upheld the National Labor Relations Commission’s (NLRC) March 5, 2010, decision that found in Espiritu’s favor.

Fuji did not renew Espiritu’s contract in 2009 upon learning about her diagnosis. She had been working for the bureau for four years when suddenly told to sign a nonrenewal contract.

She signed under protest, receiving a lump sum of $18,050 as salary, bonuses and separation pay after these were withheld for months.

She then initiated legal action, at first losing the case in the Metro Manila labor arbiter’s office at the NLRC, and later winning on appeal at the agency.

The Supreme Court ruling, promulgated on Dec. 3, 2014, and released this month, junked Fuji’s petition for review in appeal of the CA ruling and ordered that Espiritu be reinstated to her regular employment and given her back wages “computed from June 2009.”

The court ruled that Fuji could not simply terminate Espiritu because she was a regular employee entitled to security of tenure, and not an independent contractor as it asserted.

It cited how she was not accorded due process, as required by law: “Fuji immediately concluded that Arlene could no longer perform her duties because of chemotherapy. It did not ask her how her condition would affect her work. Neither did it suggest [that she] take a leave, even though she was entitled to sick leaves.”

The court also noted Fuji’s “oppressive approach” in forcing her to sign a nonrenewal contract, “with her salary and her benefits being withheld until May 5, 2009,” the time she left the network.

“What Fuji did was to inform her that her contract would no longer be renewed, and when she did not agree, her salary was withheld,” the court said.

Win for all cancer patients

For Espiritu, it was not a victory only for herself but also for all other workers afflicted with disease but productive, nevertheless.

“It’s a winning case for all cancer patients and all other individuals with a disease less than cancer,” said Espiritu who, since her termination, has never stopped working as a freelance producer for foreign news agencies.

“You know while I was reading the decision, I was crying. I was crying because I was so happy at how extensive it was,” she said, speaking to the Inquirer by phone.

Espiritu said Leonen’s ruling “gave [the situation] a human side.”

“It’s not just about me having been illegally dismissed, but of me being a cancer patient or a person with disease who cannot just be terminated,” she said.

Espiritu said she never thought she would see her two daughters graduate from high school when she was first diagnosed with lung cancer in 2009. Her firstborn, now 19, is in college, while her second is 16, about to finish high school this year.

Battling cancer has not been easy, but the Supreme Court decision gave Espiritu one less worry.

She expects her former employer to file a motion for reconsideration in a final bid to have the ruling reversed. But she said she was confident that her victory would stand.

“We already have a response in case they file [a motion for reconsideration]. But [ruling on that] is just ministerial,” she said.

“It’s a roller-coaster ride, with this case hanging over your head. Now, at least, I have closure and peace of mind. I just hope they (Fuji TV) respect the decision,” she said.

Despite her illness, Espiritu, who has been a journalist for 20 years, continues to do what she loves, reporting on the country’s biggest stories and managing international coverage of major news events.

She worked for CNN International during the tedious coverage of Supertyphoon “Yolanda” (international name: Haiyan) in 2013, directing and arranging logistics from Manila.

In January, she was again on the ground for CNN for the coverage of Pope Francis’ four-day pastoral visit to the Philippines.

For CNN, she said, her disease was “never an issue.”

Espiritu also once worked for two months, traveling by herself to Palawan, to arrange an exclusive visit of TV Asahi and Asahi Shimbun news teams to the BRP Sierra Madre, the rusty, grounded ship that serves as the Philippines’ outpost on Ayungin Shoal (Second Thomas Shoal) in the disputed West Philippine Sea.

“You know how cancer will be gone for two or three years and sometimes, there are signs that it is back. It comes and goes but it doesn’t mean that you will stop the way you live, the way you move,” Espiritu said, adding that she wanted to focus on her court victory for now, and not on her illness.

“You really have to move on. It’s not easy. But you just have to compose yourself, pull it all together because you have a family,” she said.

Filipino woman gets job back