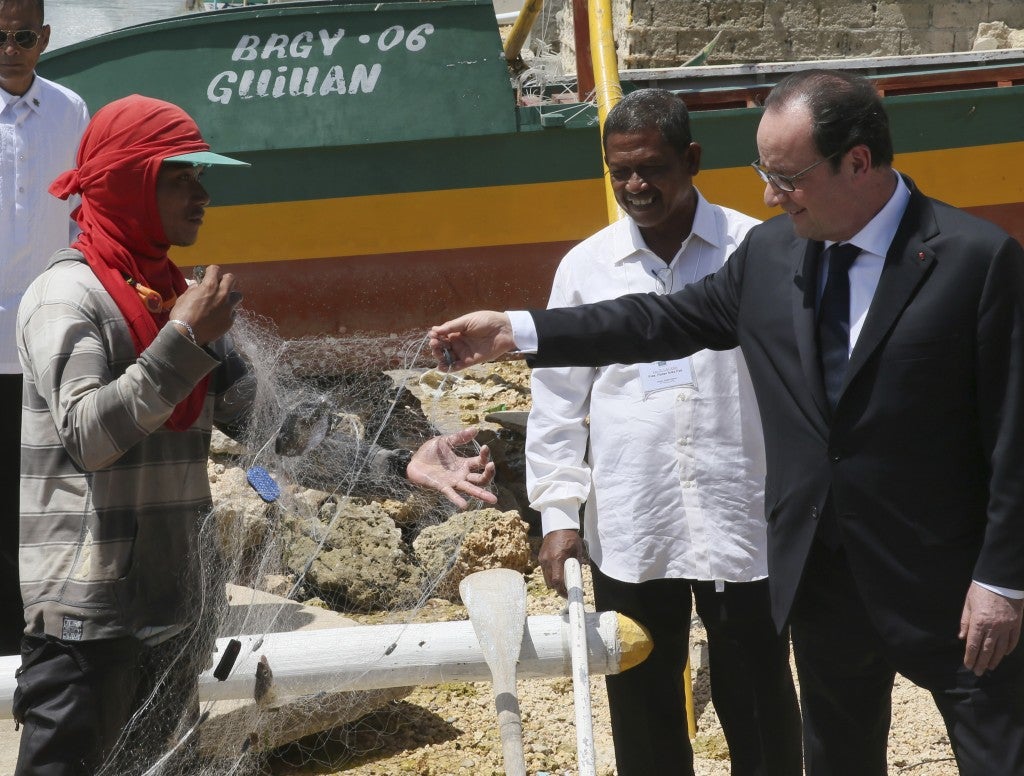 SMALL CATCH, BIG INSPIRATION French President François Hollande (right) inspects a fisherman’s fresh catch during his visit on Friday to Guiuan town, Eastern Samar, where Supertyphoon “Yolanda” first made landfall in 2013. Hollande was on a two-day visit to the Philippines to gather global support for action of the climate change summit in Paris on Dec. 7 to 8. The French president drew inspiration from the devastated town: “We’ll be acting in the name of Guiuan so that nothing like this will ever happen again.” AP

GUIUAN, Eastern Samar—His visit lasted only two hours, but French President François Hollande still got to see the extent of the devastation caused by Supertyphoon “Yolanda” even if more than a year has passed.

On the second and final day of his state visit, the French President on Friday took his campaign to build diplomatic momentum for a landmark climate summit in Paris in December to this remote Pacific coast town where Yolanda (international name: Haiyan) made its first landfall on Nov. 8, 2013, before claiming more than 7,300 lives.

Speaking through an interpreter, Hollande said he would use what he saw in Guiuan to convince the world to come to an agreement to stop climate change during the 21st Conference of the Parties to the UN Framework Convention on Climate Change in Paris in December.

“We want to sign a novel and binding agreement, and France will mobilize all countries in the world… for the success of the conference. I will remember your faces (and) remember we will be acting in the name of Guiuan so that nothing like this will ever happen again,” Hollande said.

“The world will act for you and I want success in Paris,” he told a crowd of about a thousand, composed of government workers, residents, schoolchildren and municipal officials who were gathered at the Guiuan East Central School.

According to the World Meteorological Organization, Yolanda has been confirmed to have been climate-change induced.

And this town, which is still trying to recover from the devastation, was almost a perfect backdrop for Hollande’s campaign to stop climate change.

At least 102 people were confirmed dead with 16 still missing and 58 percent of the town’s houses destroyed. Yolanda displaced more than 20,000 fishermen in a town where at least 80 percent of the more than 50,000 residents rely on fishing.

Even more than a year after the typhoon, several houses and business establishments have not been repaired. At least 32 families are still living in bunkhouses in Barangay (village) Cogon, said Mayor Christopher Sheen Gonzales.

Gonzales welcomed Hollande, the first foreign head of state to visit the town, who arrived in Guiuan at about 11:20 a.m. on board a Philippine presidential plane.

He was joined by members of his party: Laurent Fabius, minister of foreign affairs and international development; Annick Girardin, minister for cooperation and Francophony; and Ségolène Royal, minister for ecology, sustainable development and energy. French actresses Melanie Laurent and Marion Cotillard added their star power to Hollande’s climate change campaign.

Among the Philippine officials who joined Hollande in Guiuan were Social Welfare Secretary Dinky Soliman, Finance Secretary Cesar Purisima and Lucille Sering, commissioner of the Philippine Commission on Climate Change.

Hollande, who was in a business suit despite the heat, first went to the municipal hall where he was briefed by Gonzales on the rehabilitation work being undertaken by the municipality.

He also met with about 50 fishermen at the Guiuan terminal before going to the Guiuan East Central School where he spoke for about 20 minutes. He flew back to Manila about 1:20 p.m.

‘How strong you are’

In his speech, Hollande expressed his admiration for the people of Guiuan who were able to recover after their strength was tested by the world’s strongest typhoon to make landfall.

“I want to come here all the way from France to your place, Guiuan, to show to the entire world… how brave you are, how strong you are and how resilient you are,” he said.

“We, who were at the receiving end of one of the strongest typhoons in history, strongly support [the call] for immediate action in battling climate change. We have witnessed the (impact of what was) unknown to us before. We have lost our homes, livelihood and loved ones,” Gonzales said.

Classes at the Guian East Central School were suspended for the visit. Grade 5 pupil Rizza Esteban, 12, said she was proud that Hollande visited her school.

Fisherman Alberto Acosta, 52 said they were proud that a foreign head of state came to their island-municipality.

“It is our honor that he visited us,” he said.

Hollande chose the Philippines, considered a frontline state in struggle against global warming for having been been devastated by one of the most powerful typhoons on record to hit land, to warn of the dangers of global warming and call for governments to reduce greenhouse gas emissions.

“In the eyes of the world, Manila is a symbol of suffering and hope,” Hollande said on Thursday.

On Thursday, the French President launched an appeal with President Aquino in Manila for world leaders meeting in Paris to secure a “universal, equitable and ambitious climate deal” that would avert catastrophic global warming.

Their appeal offered a show of unity that they said could serve as a model for rich and poor nations, whose divisions led to a similar effort at a UN summit in Copenhagen in 2009 ending in disarray.

“We have a duty to act together and that’s why I came here to the Philippines, to launch an appeal, to seal an alliance,” Hollande said.

The international appeal, named “Manila Call to Action,” urges the international community “to conclude a universal, equitable and ambitious climate deal… to preserve our planet as a livable place for future generations.”

It says developing countries like the Philippines have contributed the least to climate change, but are the ones to suffer the most from global warming.

The Paris agreement is not expected to stop climate change, but organizers hope to secure for the first time the commitment of most countries to do something about it.

The conference faces a major dilemma on how to raise $100 billion in yearly climate aid by 2020 to help poorer economies. Hollande said it was France’s “ambition” to generate $100 billion starting 2020 for the “funding of what would be energy transition and the protection of the most vulnerable countries.”

In his remarks at the launch of the Manila Call to Action in Malacañang on Thursday night, Hollande announced a grant of at least 50 million euros to the Philippines in support of the country’s efforts to fight climate change and for disaster prevention projects.

“I offered to President Aquino 50 million euros through the French Development Agency to work on projects to prevent further disasters from happening,” Hollande said.

The grant is part of the Joint Declaration on the Enhanced Partnership between the Philippines and France, where the two countries also condemned terrorism in all its forms and encouraged the international community to “work together to fight this scourge to mankind.”

The French President, who ended his visit on Friday, was all smiles at the Villamor Air Base as he boarded his plane, an Airbus 330, about 7 p.m., four hours later than his scheduled departure.

It was almost dark when Hollande was given military honors, with Vice President Jejomar Binay and Foreign Affairs Secretary Albert del Rosario sending him off.

Hollande was supposed to arrive from Guiuan at 2 p.m. but did not land at Villamor until about 4 p.m.–With Nikko Dizon, Maricar Brizuela, AFP and AP

‘It’s our duty to save Earth’