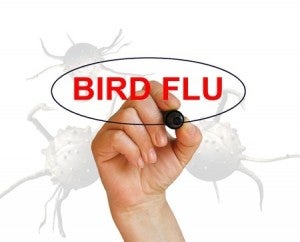 MANILA, Philippines–A Filipino who worked in China for six years died after showing symptoms associated with avian influenza or bird flu, the Department of Health (DOH) said on Monday.

In a press conference, Acting Health Secretary Janette Garin said that the Filipino worker decided to return to the country on Feb. 9 after feeling weak. Then after five days, he died from acute respiratory distress syndrome after suffering from cough, fever, and stomach pains.

Garin said that the worker was first considered as a possible case of the Middle East Respiratory Syndrome-Corona Virus (MERS-CoV) but was reclassified as bird flu upon checking his work history.

“Due to the symptoms he exhibited, the fast progression of the disease and the history of travel from China coupled with a history of being exposed to live poultry, the patient was considered a possible case of Avian Flu or Bird Flu,” the Health Secretary said.

DOH did not conduct an autopsy on the victim as he was immediately cremated to prevent the spread of the virus.

The health department declared the case as “closed” after initial results of pulmonary findings were found to be inconclusive.

Meanwhile, the DOH allayed fears that the virus might spread as the worker’s death and cremation ended the possibility of transmission.

“If indeed this patient contracted bird flu, his death has ended other possibility of transmission. Kaya wala po tayong dapat ikabahala (We do not have a reason to worry),” Garin added.

The DOH appealed to overseas Filipino workers to truthfully fill-out the health declaration arrival checklist upon their arrival to the country.

“Effective control of infectious diseases in the Philippines [requires] every person to do their share of responsibility by being cooperative, honest, and mindful,” she ended.

Read Next
DFA: Oplan Exodus ‘100% Filipino’
EDITORS' PICK
Is it safe to talk politics again at family gatherings? ‘The Reconciliation Dinner’ shows us what that’s like
vivo’s coming to town to grant wishes with more holiday promos
Pagasa: Warm, sunny Sunday in most parts of PH
House energy committee chair Arroyo bats for cheap electricity
EDITORIAL: To a bike-friendly future
The Best Tech Gifts For The 2022 Holidays
MOST READ
LOOK: Vhong Navarro transferred to BJMP detention facility in Taguig
The Elephant Man in the Senate
Posh village as ‘shabu’ haven
LOOK: Zanjoe Marudo bonds with Ria Atayde, her family
Don't miss out on the latest news and information.