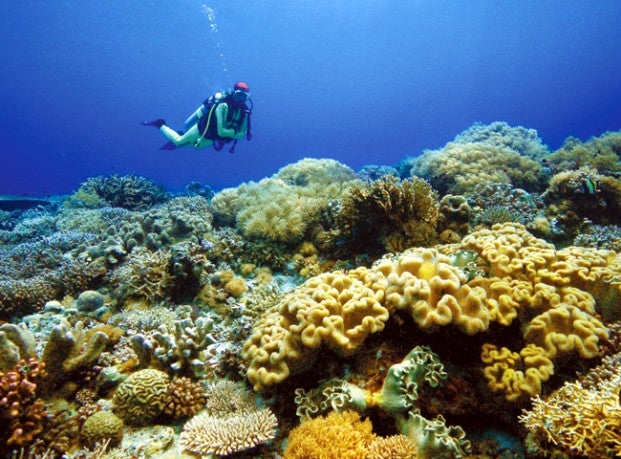 A diver fins through a field of pristine soft leather corals at the Tubbataha Reefs Natural Park. YVETTE LEE/CONTRIBUTOR

MANILA, Philippines—Palawan Bishop Pedro Arigo is offering the church’s services in monitoring the repairs at the world-renowned Tubbataha Reefs Natural Park, part of which had been damaged by a US warship in January 2013.

“If we would be given an opportunity to participate in the monitoring, like what we have been doing at the UBAS (Ugnayan ng Barangay at Simbahan), the church would welcome it,” Arigo said in an interview over the Church-run Radyo Veritas.

He himself expressed willingness to join the monitoring team, saying he wants to ensure that the P87 million, which the United States paid as compensation for the damages caused by the USS Guardian on the United Nations Educational, Scientific, and Cultural Organization World Heritage Site, would not be diverted to some other use.

It should be spent to rebuild the prized corals that were damaged when the US Navy minesweeper USS Guardian ran aground at the Tubbataha Reef in 2013, he said.

“You know very well the system in the Philippines that is why we really need to properly account how the money would be spent. It should be used to really repair the damage, if it is still possible to be repaired,” he added.

Arigo said he was hoping that some of the amount would also be used in exploring the use of technology that would speed up restoration of the affected corals.

“They said that there is a kind of technology that can be used to hasten the revival of the corals. We really need to account how the P87 million would be spent,” he said.

On Jan. 17, 2013, the USS Guardian hit the south atoll of the Tubbataha Reef in the Sulu Sea, damaging at least 2,345 square meters of the coral reef that investigators said would take a generation to regrow.

The incident triggered national anger against the United States, which apologized for the accident and issued a report five months later that blamed the captain and three other officials.