Quadriplegic after an accident, Filipina TFW in Canada fears deportation 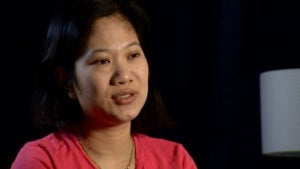 Maria Victoria Venancio lost her job and permit to stay after a traffic accident left her a quadriplegic. CBC PHOTO

The 29-year-old, who told CBC News to call her “Andrea,” hopes authorities would allow her to stay in Canada. Other news reports in Canada, however, identified her Maria Victoria Venancio.

She has applied for permanent residency on “humanitarian and compassionate grounds.” She came to Canada in 2011. Her case will now be sent to the Canada Border Services Agency (CBSA).

Venancio was struck by a car two years ago while she was biking to her job at McDonald’s. The crash left her unable to walk, so she could no longer work. She hasn’t been able to tell some of her family in the Philippines. Her mother, she said, has no idea.

Venancio’s disability has also affected her status in Canada. Her visa wasn’t renewed because she can no longer work, and since she is now in Canada illegally, she has no medical coverage.

She is living with friends, but money from her settlement as a result of the accident is not going to last very long.

Venancio is enrolled in a research program at the University of Alberta, where she is able to get free physical therapy.

Though she will always need to use a wheelchair, therapists believe Venancio could walk short distances with crutches. But physiotherapist Donna Livingstone said she would need thousands of hours of therapy to be able to walk around.

Venancio worries about what will happen if she is sent back because there are not as many support services and facilities for the disabled in the Philippines.

If the government approves her application for permanent residency, she said she would like to go to university and become a social worker.