No vaccines, no treatment – Orange County, Calif., pediatricians to parents 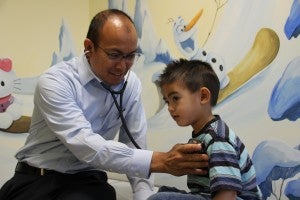 MISSION VIEJO, California — In the next few weeks pediatricians will send letters to parents of their existing patients that practitioners like Fil-Am Dr. Mike Villa Delgado will treat only patients who receive vaccinations that comply with the California School Immunization Law.

The OC Children’s Medical Group letters will be a final notice that those who refuse to comply would only be given referrals to practices that have adopted a more holistic approach to medicine.

Orange County made national news late last year when 26 confirmed cases of measles were specifically linked to Disneyland guests who had visited the international tourist destination from December 15 to 20.

Since then, health officials have confirmed that 125 people in 14 states have been reported to have measles, the majority of them stemming from the “large, ongoing multi-state outbreak” linked to the same Disney misadventure.

Measles is a highly contagious, acute viral illness that begins with a fever, cough, runny nose, and pink eye, which lasts for two to four days before the rash appears. Infected people are usually most contagious from four days before until four days after rash onset. Measles may cause life-threatening complications including pneumonia and encephalitis (brain swelling).

Measles is transmitted by contact with an infected person through coughing and sneezing. As was the case in Disneyland, after an infected person leaves a location, the virus remains viable for up to two hours on surfaces and in the air.

Several schools in the LA-Orange County Area implemented quarantines of students not fully vaccinated for periods of up to three weeks to prevent further outbreaks when measles exposures were reported in their schools.

Letters were sent out this week by the Capistrano Unified School District to parents of children whose records showed that they were not fully vaccinated against MMR. The notice to parents states, “If your child is not immunized against MMR and is exposed to measles, he/she may be excluded from attending school or child care by the Orange County Health Care Agency to prevent further spread of the disease.”

California law requires that children entering kindergarten be fully vaccinated against a range of diseases.

While measles continues to plague other parts of the world, the Centers for Disease Control and Prevention (CDC) had declared measles as eliminated from the United States in 2000.

The US was able to eliminate measles because of it’s nationwide strong vaccination program and a highly effective measles vaccine. But just because measles is no longer native to the United States doesn’t mean that it is able to stop it from continually brought in by international travelers. 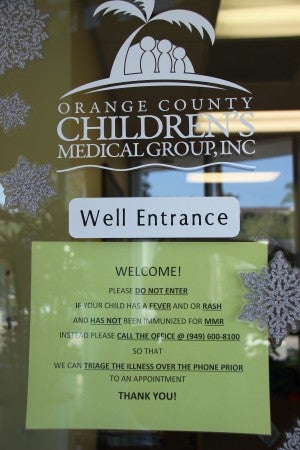 Signs like this at the OC Children’s Medical Group clearly state that patients without vaccinations and possible symptoms of measles are not permitted inside the clinic. PHOTO BY CRISTINA PECZON-RODRIGUEZ

In 2004, the CDC reported an all time low of 37 measles cases in the country. However, last year, travelers visiting the Philippines carried measles back to the United States triggering the biggest outbreak since year 2000. A whopping total of 644 cases were confirmed across the country, some 22 of them based in Orange County.

“Dr. Mike,” a Filipino doctor  who was born and raised in the US, said that since he was vaccinated as a child, he has never had measles himself. In his 12 years of practice, the last five of which were with the OC Children’s Medical Group, he has also never personally come across a case of the measles.

“It’s sad that it has to be this way, “ says Dr. Mike, “but in a way, this measles outbreak has made our job easier. People are starting to see and learn about why immunizations are important. We have a lot of phone calls asking about the measles outbreak, asking what they need to do to make sure they are protected.”

The decision of the physicians and staff at the OC Children’s Medical group not to treat patients of age who have chosen not to receive immunizations was unanimous. Both the CDC and the American Academy of Pediatrics (AAP) recommend that healthy children get vaccinated against 14 diseases by age two.

The change in the compliance with vaccinations came about after the 1998 publication of a fraudulent research paper in the medical journal The Lancet that lent support to the claim that colitis and autism spectrum disorders were linked to the combined measles, mumps and rubella (MMR) vaccine.

Several celebrities led by former Playboy Bunny now TV host Jenny McCarthy championed the study, claiming that vaccines caused autism in her child. In 2010 however, The Lancet research paper was later retracted and discredited when it was revealed that the author of the original research paper had multiple undeclared conflicts of interest, had manipulated evidence and had broken other ethical codes.

Before the measles vaccination program started in 1963, the CDC estimated that about 3 to 4 million people got measles each year in the United States. Of those people, 400 to 500 died, 48,000 were hospitalized, and 4,000 developed encephalitis from measles.

Despite this, the number of parents who choose to not to vaccinate continues to grow. “It’s not a huge number,” shares Dr. Mike, “but we do have patients who were grandfathered into our practice when we set up the OC Children’s Medical Group five years ago who continue not to believe in vaccinations. Maybe in 1000 patients, there are between one to two dozen of them.”

“While I fully support families that believe in holistic health practices, my practice is not that extreme,” says Dr. Mike. “Those patients are the ones who usually do not believe in antibiotics or the like. And over time, when they come in with their infants and do not agree to our recommendations, they usually seek attention elsewhere”.

“Our policy to immunization on schedule, which has been in place for the last four years for new patients, is for the protection of all of our children and patients,” says Dr. Mike who has three children of his own, all immunized. “Parents that feel otherwise will be given other option and referrals to another practice.”

Amidst the current measles outbreak, patients who have a fever and a rash are screened over the phone even before they are allowed to be seen by a doctor. Patients who are not fully vaccinated with these symptoms will be examined in their cars by one of their doctors if such an occasion arises.

Dr. Mike’s message is clear. “We want people to know that measles can be eradicated. We want our families to make informed decisions. My job is to educate people. It’s scary that people chose to read articles on the Internet, written by perfect strangers, and they choose to believe them even though they are not confirmed.

“I would like to think that you choose your pediatrician because you trust them. Trust what your doctor recommends for the health of your family.”

As to the fears of some families that too many vaccinations at one time are tough on children, he says, “I do allow for light changes. I like to think of the vaccination schedule as a race. As long as we all finish at the line, it shouldn’t matter if vaccinations are spread out with minor time schedule changes. I don’t mind spreading them out, within reason, just as long as the children do get the shots. It shouldn’t matter. Ultimately what we want is the protection of all.”