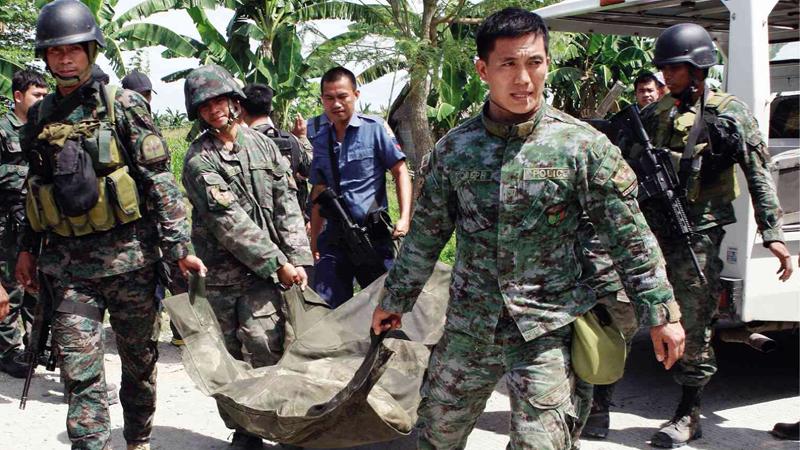 COTABATO CITY, Philippines—Eight Americans were monitoring from the Special Action Force (SAF) command post the operation against a Malaysian terrorist in the marshland 11.8 kilometers away that went wrong and left 44 police commandos dead on Jan. 25, the Inquirer has learned.

A US drone located trapped SAF commandos as they were battling their way out after killing their target, Zulkifli bin Hir, alias “Marwan,” according to three sources who spoke on condition of anonymity.

But it was unclear if the Americans, who were in civilian clothes but had a military bearing, dispatched the unmanned aerial vehicle that tracked down the fleeing SAF troopers until they were rescued by police and Army reinforcements.

Director Getulio Napeñas, the SAF commander who was sacked after details of the commando slaughter unfolded under media spotlight, was directing the mission from the command post set up in an abandoned base of the Armed Forces of the Philippines in Shariff Aguak, the Maguindanao province capital next to Mamasapano, scene of the action.

A military officer reported seeing the Americans when they arrived at the SAF post in the morning, hours after the predawn raid on Marwan’s hut.

“They were monitoring the ongoing operation (Oplan Exodus) from the base,” the officer said. “I saw them there, eight of them non-uniformed crew.”

The sources said the drone located the trapped members of the SAF’s 84th Company, also known as the Seaborne, that was tasked with getting Marwan, who had a $6-million bounty on his head put up by the United States.

“There were even armed men at that time planning to get close to them to kill them all,” one source said.

Napeñas has denied US involvement in the mission to get Marwan, except in the medical evacuation of the casualties. The US Embassy also has denied it had anything to do with the project, apart from providing a helicopter to airlift the wounded.

Of the 38 members of the 84th Company, nine were killed. All but one of the 36-member 55th Company were slaughtered.

“They were told by the surviving Seaborne that they had with them the hand of Marwan. One of the rescuers in fact thought there was one whole dismembered hand traveling with them as they made the long trek back to the highway,” another source said.

It turned out to be a finger, which Supt. Raymond Train carried with him for DNA testing by the Federal Bureau of Investigation. The FBI later said initial tests indicated the sample matched the DNA of Marwan’s brother detained in California.

On the night of Jan. 25, a US-contracted, noncombat Evergreen Bell Helicopter landed near the provincial headquarters of the Philippine National Police in Shariff Aguak for the evacuation of the SAF casualties.

The rescue team reached the men of the 84th Company at midnight. They were found exhausted, thirsty and hungry. Some of them appeared disoriented. Train asked for water and Gatorade. The men were given Skyflakes biscuits. Their dead were beside them.

“We thought we would die,” one commando told the rescuers.

The entire time, the rescue team saw lights dancing from afar. Flashlights of the hostile forces, they thought.

The SAF troopers helped the wounded while the Army soldiers carried the dead. A smaller group from the rescue team also scoured the area to ensure that none of the Seaborne’s weapons, ammunition and equipment was left behind.

Quickly, they began their six-hour, 3-km trek back to the main road, following a trail through banana and coconut stands.

Train was in a hurry to get out, calling out the time from his watch, one source said. He walked ahead of the others who were slowed down by the weight of the dead, the wounded and the equipment.

When they reached the river, 12 meters wide and with waist-deep water, the Army soldiers carried some of the wounded commandos above their heads. The rest of the rescuers held on to the dead who floated because of their vests.

Finally, at 5:30 a.m. on Jan. 26, the rescue team reached the highway, turning over the injured and the dead to the waiting SAF troopers.

‘US behind Oplan Exodus’