‘US behind Oplan Exodus’ 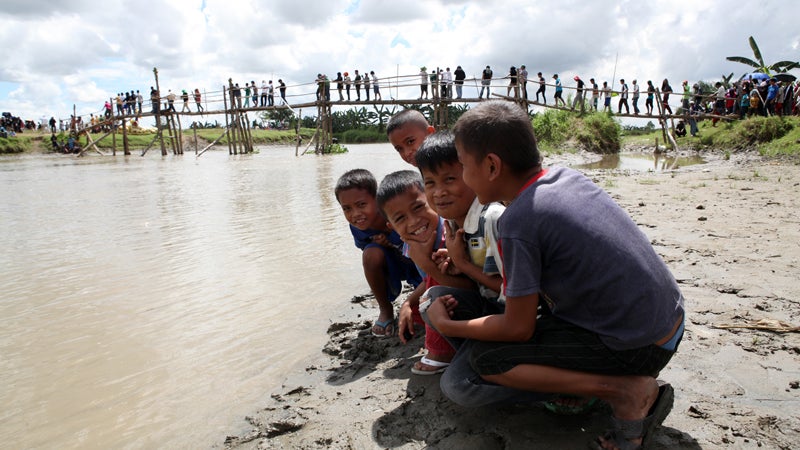 BACK TO LIFE ANEW Children chat on the riverbank as residents of Tukanalipao village cross a wooden bridge in Mamasapano, Maguindanao province, where 44 police commandos, 18 Moro rebels and five civilians were killed during intense fighting that stalled peace talks. JEOFFREY MAITEM/INQUIRER MINDANAO

ZAMBOANGA CITY, Philippines—The operation to get Zulkifli bin Hir, the Malaysian bomb terrorist known as “Marwan,” was a US-directed project from start to finish, according to an officer of the Special Action Force (SAF), the elite group that carried out “Oplan Exodus” at the cost of the lives of 44 police commandos.

“The Americans started this. They funded the operation, including intelligence,” said the SAF officer, who spoke to the Inquirer on condition of anonymity.

Marwan was likely killed in the operation, as indicated by initial DNA tests conducted by the FBI that showed a sample from his finger, cut off by another SAF officer, matched DNA from his brother who is detained in California.

The source said that in the operation called Oplan Exodus, the Americans tapped the SAF’s 84th Company and trained its members at La Vista del Mar Resort, owned by the family of Zamboanga City Rep. Celso Lobregat.

Mayor Maria Isabelle Salazar told reporters that what she knew was that the facility at the resort was donated by “el Americano.”

There was no immediate comment from the US Embassy, which earlier denied involvement in the Mamasapano operation.

Director Getulio Napeñas, the sacked SAF commander, insisted in congressional hearings last week that the only American involvement in the botched mission was in the medical evacuation of the casualties.

The SAF Seaborne unit in Calarian, the 84th Company, was led by its newly appointed commanding officer, Senior Insp. Gednat Tabdi, who was among those killed in Mamasapano. But the source said an American named Allan Konz was in fact in command, not Tabdi who cut off Marwan’s finger for the DNA testing later done by the FBI.

“He (Konz) was the immediate supervisor of the 84th for Marwan’s intelligence packet,” the source said.

The source added that at the height of the Mamasapano operation, Konz was in the command post at the 43rd SAF Company based in Shariff Aguak, Maguindanao province.

Napeñas has admitted that during the Mamasapano operation, he was at the command post in Shariff Aguak. He, however, did not say if he was in the company of Americans.

He said it was the Americans’ decision not to include other units from the Armed Forces of the Philippines, and if there was coordination, it was for close intelligence work.

“During the planning, the Americans really did not want to coordinate with the Army. If there was going to be coordination, they would rather give the operation to another unit,” the source said.

The original Oplan Exodus was “to fuse” the 55th and 84th Companies, the source said.

“The two companies were supposed to be together as an assault group and the other units would just serve as support, but the Americans did not want it that way; they wanted the 84th as the assault team,” the source said.

The source added that during the planning, the operatives were assured of reinforcements—300 SAF men, the Army’s mechanized unit, which were just 3 kilometers from Mamasapano, and “indirect fire.”

During the actual operation on Jan. 25, the 84th Company was the assault group while the 55th served as a blocking force. Some 300 other SAF men maintained a distance of about 2 to 3 km from the target area.

The source blamed the US forces who altered the operational plan and the delayed actions of President Aquino for the deaths of the 44 police commandos.

“The Americans used us. For us, we can allow ourselves to be used only to gain knowledge and expertise, but not end up like this,” the source said.