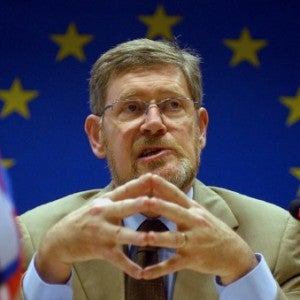 The team, headed by Alistair MacDonald, former European Union ambassador to the Philippines, on Friday presented its second annual public report, detailing the initial progress of the agreements on normalization, socioeconomic development and transition from the Autonomous Region in Muslim Mindanao to the Bangsamoro Transition Authority.

Justice for those killed

The team members admitted that the Jan. 25 clash between police commandos and Moro guerrillas in Mamasapano town, Maguindanao province, has affected the peace process. They said it would be necessary for both sides to exert efforts to attain justice for those killed and wounded in the incident.

Marwan was killed in the operation, but Usman managed to get away.

“We need to identify those individuals responsible. They must be brought to face proper justice,” MacDonald told reporters in a news briefing in Pasig City.

“I think it is evident that the very tight deadline which Congress is working on is already difficult. It is worth underlining that both Senate President Franklin Drilon and House Speaker Feliciano Belmonte Jr. want to continue efforts once Mamasapano has been addressed,” MacDonald said.

He said since emotions were running high following the clash and discussions were not neutral, the timeline set for the passage of the Bangsamoro Basic Law and the succeeding plebiscite on the Bangsamoro creation would be affected.

“It is impossible to make predictions at this point,” he said, but commending the Aquino administration on its effort to resolve the conflict in Mindanao.

“It is evident that the Aquino administration really puts its heart and soul in addressing the conflict in Mindanao,” MacDonald said.

But MacDonald urged both parties to renew their commitment to the process and not to overlook the substantial progress achieved in 2014 in different dimensions of the peace process.

“Ending decades of violent conflict cannot be accomplished overnight and the painstaking efforts of all those working for peace deserve to be acknowledged,” MacDonald said.

The release of the second annual report was aimed at remembering the great distance that the two parties had traveled to achieve long-lasting peace.

In its report, the team noted that 2014 saw major progress in the implementation of the peace agreement, one of which is the completion of the normalization annex in January, the historic signature of the Comprehensive Agreement on the Bangsamoro in March and the submission of the draft law to the Congress in September.

Before the Mamasapano clash, congressional deliberations and consultations had begun, the team said.

“Now, since Jan. 25, many of the preexisting challenges will become even more acute. Emotions run high and confidence in the process has taken a knock. But while challenges are great, the prizes to be gained are even greater,” MacDonald said.

Despite the setback, the team expressed optimism that lasting peace in Mindanao will be achieved.

“I am optimistic about the peace process. I am not optimistic about a quick and easy solution. But we do believe that the parties will eventually find a way forward for sustainable and just peace,” MacDonald said.

Apart from MacDonald and Rood, the team, which was created in 2013, is composed of international peace advocates Huseyin Oruç, the founding head of the Preparation Committee of the Code of Conduct for Islamic Nongovernmental Organizations for the Organization of the Islamic Conference; Karen Tañada, executive director of GZO Peace Institute; and Rahib Kudto of the United Youth for Peace and Development.