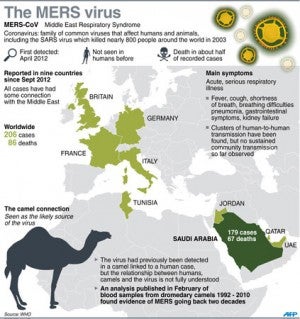 The 32-year-old nurse is now four to five weeks pregnant, making her an “immuno-compromised” patient, she said.

“Her immune system is weak as compared to a regular patient who is not pregnant. And if one’s immune system is weak, the virus’ attack is possibly stronger or it may remain in the patient longer depending on her immune response,” Garin explained, adding that the baby was also being closely monitored by an obstetrician.

It is possible for the baby not to get infected with the virus, she said.

“But the virus may affect the baby’s survival if the mother is not cured… it depends,” she added.

But Garin said the nurse, being relatively young, had more chances of surviving the virus.

“The patient is 32 years old. She is considered young in terms of MERS-CoV infection. Those 50 years old and above are the ones considered to be more at risk,” she said.

She said the patient was in stable condition but remained confined at the Research Institute for Tropical Medicine (RITM) where she was admitted Monday after complaining of fever, body aches, coughing and breathing difficulties, which are the symptoms of MERS-CoV.

Garin said the nurse no longer had a fever but her sputum still tested positive for MERS-CoV.

The three tests done on the nurse, who arrived with her husband from Riyadh on Feb. 1, all yielded positive for the virus, she said.

The DOH said the nurse’s initial consultation at an undisclosed health facility did not treat the case as MERS-CoV until the nurse was referred to the RITM on Monday, where she was immediately confined in one of the hospital’s negative pressure rooms.

The husband and the mother-in-law were also taken to RITM for MERS-CoV testing.

Garin said the government had so far located 63 of the 224 passengers on the Saudi Airlines flight the nurse had taken.

She said 49 other people who came in direct contact with the patient, including health personnel who attended to her in the first health facility, had all been tested for the virus but the results had yet to be released.

“Even if you have submitted yourself for testing, the results may not be released right away. But we are assuring the public that when we release results, these are reliable,” Garin said.

No reason to panic

MERS-CoV is a respiratory disease that has infected and killed hundreds, mostly in Saudi Arabia. It is considered a deadlier but less transmissible cousin of the SARS virus, and comes with symptoms that are similar to the common flu, including fever with cough, cold and sneezing. The incubation period of the virus is usually 14 days.

Garin said there is no reason for the public to panic even with the confirmation of the country’s first positive case of MERS-CoV.

“There is no reason to panic. The patient is being taken care of. But we must remain vigilant, we must be cautious, especially if you have been to the Middle East and you are manifesting some symptoms of the virus,” Garin said.

In San Pedro City, health and local officials on Thursday allayed fears over the spread of MERS-CoV after the DOH confirmed that a Filipino nurse from this city tested positive.

In Barangay (village) San Vicente, where the patient is a resident, people started wearing face masks while a public elementary school suspended classes.

“The people panicked and started wearing face masks that [a drugstore] has run out of masks,” said village official Vicente Solidum in a phone interview.

“Representatives from the DOH had just explained to us that there’s no need to panic or wear a face mask since the people she had direct contact with are now confined,” Solidum said.–With Romulo Ponte, Maricar Cinco, Inquirer Southern Luzon

Read Next
There’s less media freedom in world today, says report
EDITORS' PICK
Quarantine violations still punishable despite deleted provisions in ‘Bayanihan 2’ – Bato dela Rosa
‘Puno na lahat:’ Metro workers brave lack of public transport, rains on Day 1 of GCQ
Leveling up your ‘lutong bahay’ with the kitchen companion you never knew you needed
Someone from the Philippines can become $356 Million richer this Tuesday
BFP raises general alarm over Mandaluyong fire
Cherry Mobile teams up with Cloud Panda PH, launches online store
MOST READ
‘If I had not been SolGen, I will make you eat your words,’ Calida tells Coco Martin
BFP raises general alarm over Mandaluyong fire
51 percent of German firms holding back investments in PH, but not because of COVID-19
5 car dealership outlets shutting down
Don't miss out on the latest news and information.