Filipina maid still wants to work in Singapore after attack 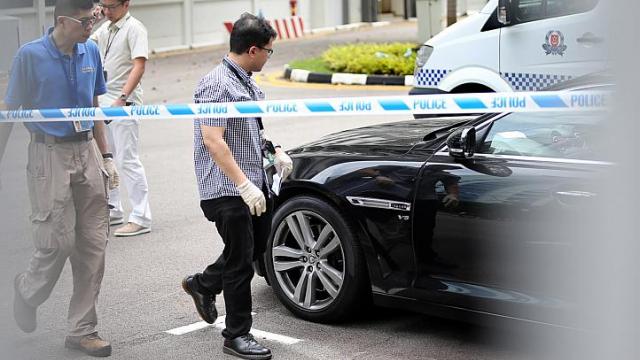 Police investigations underway at Block 9D of Park View Mansions, Yuan Ching Road, Jurong on Jan 30, 2015. Filipino maid Ms Jasmen Corpuz, who was seriously injured in an attack that ended in the deaths of a man and his wife, has been discharged from hospital and says that she plans to stay. PHOTO from  NEW PAPER

SINGAPORE — A Filipino maid who was seriously injured in an attack that ended in the deaths of a man and his wife, at a Yuan Ching Road condominium, has been discharged from hospital.

In her first contact with the media since she was allegedly slashed by her employer on January 30, Jasmen Corpuz, 37, told The Straits Times in a brief interview last Monday that she plans to stay.

“I am fine now and I want to continue to work in Singapore,” said Corpuz, who left the National University Hospital last Saturday.

She was allegedly attacked by Singaporean Ken Ong, 37. She had worked for his family for more than four years.

The incident happened shortly after Corpuz had accompanied the couple’s five-year-old son to his kindergarten nearby and returned to Parkview Mansions.

Although Corpuz declined to talk about it, she is believed to have intervened when she saw Ong stabbing his wife, Malaysian Karen Koh, 39. But Ong allegedly turned the chopper on her.

Corpuz escaped from the third-floor unit and ran down the stairs, where a cleaner found her and alerted the police. She is said to have had slash wounds on her shoulders and back, and a gash on her left upper arm exposing bone.

The police found the couple seriously injured and they later died in hospital.

It is believed Ong stabbed himself in the abdomen after stabbing his wife. Before he died, Ong, who was jobless, sent a long e-mail to the media and others, describing his failed marriage.

On what she needs, Corpuz said “everything is taken care of”.

He said: “She wants to stay here and work but, of course, she has to recuperate first.”

Read Next
Japanese with fake gold certificates charged
EDITORS' PICK
House energy committee chair Arroyo bats for cheap electricity
Honolulu Café is the cure for your Egg Tarts and Roastings cravings
Petition to reverse Comelec decision on Bongbong Marcos’ DQ case reaches SC
Luxe property: A way to build, preserve wealth
PH detects local transmission of Omicron subvariant BA.2.12.1
OVP: Pilot’s claim vs Robredo ‘never happened’, a ‘malicious fabrication’
MOST READ
Heart Evangelista gets a ‘no’ from Chiz Escudero after asking, ‘Do I deserve a bag?’
Congress canvassing of votes for president, VP to begin May 24
Man posing as Marcos spox revealed to be an inmate in Bilibid — Guevarra
Marcos DQ petitioners told: ‘Learn to respect will of the Filipino people’
Don't miss out on the latest news and information.