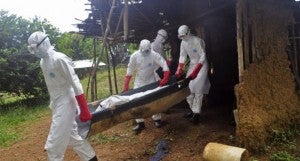 Ebola health care workers carry the body of a middle aged man that they suspected of dying from the Ebola, on the outskirts of Monrovia, Liberia. AP FILE PHOTO

MANILA, Philippines – The Department of Health (DOH) has said the deployment ban of overseas Filipino workers to three West African countries and the 21-day quarantine period on travelers arriving from the three countries will continue as the dreaded Ebola virus remains a global threat.

At a press conference on Monday, Acting Health Secretary Janette Garin said the decision to proceed with the safety precautions the Philippines has been observing since the Ebola outbreak in Sierra Leone, Guinea and Liberia last year was based on the recommendations by the Ebola rapid response team.

The team, composed of six Filipino infectious diseases experts from the San Lazaro Hospital – one of the “prepared institutions” for Ebola – arrived in the country on Feb. 3 after a two-month stay in the three West African countries.

The doctors, who were part of an inter-agency team that included the Department of Foreign Affairs, the Philippine National Police and the Department of Labor and Employment, went to Guinea, Liberia and Sierra Leone to observe, assess and provide recommendations on the safety and security of OFWs deployed there, said Garin.

“We thank our six doctors who sacrificed their Christmas and New Year so they will be able to help our OFWs in the Ebola-stricken areas,” said Garin, who welcomed the team during the flag ceremony at the DOH headquarters in Manila on Monday.

“They gave valuable inputs and important insights, which led our government to learn crucial lessons on the best actions to take to ensure that the Ebola virus disease will not affect our countrymen,” Garin said at the press briefing.

She said the team’s recommendation was for the government to maintain the 21-day quarantine period for arriving OFWs and foreign travelers from the affected countries and to continue the current ban on the deployment of workers there in the meantime.

“There is a fear that the healthcare systems in Liberia, Guinea and Sierra Leone are not yet effective,” she said, pointing out that an OFW seeking medical treatment for a simple illness like hypertension might find it hard to get help in those countries.

“At this point in time, their healthcare systems collapsed… so if you are a Filipino working there and you are sick, you have no place to go,” said Garin.

Villanueva, who was deployed to Liberia, said 90 to 95 percent of the hospitals in the Ebola-stricken countries have remained closed to prevent the risk of admitting an Ebola patient. “Definitely, of the three countries, Sierra Leone is the most in need with regard to the health situation,” he said.

As of Feb. 6, the deadly virus has claimed 9,004 lives out of the 22,525 people who were infected in the three countries, the World Health Organization said.

Villanueva said prior to their deployment to the three countries, they had to undergo extensive training and briefings on Ebola protocol, especially the donning and doffing of the personal protective equipment garments, and health emergency management system.

“When we left, we were 50 kilograms overweight in medical equipment just to make sure that we were safe,” he said.

But the DOH was quick to clarify that the team did not have contact with sick Ebola patients and only visited Filipinos to assess their situation amid the raging outbreak. The health agency also said the doctors also observed a 21-day quarantine period in an undisclosed country before they returned home.