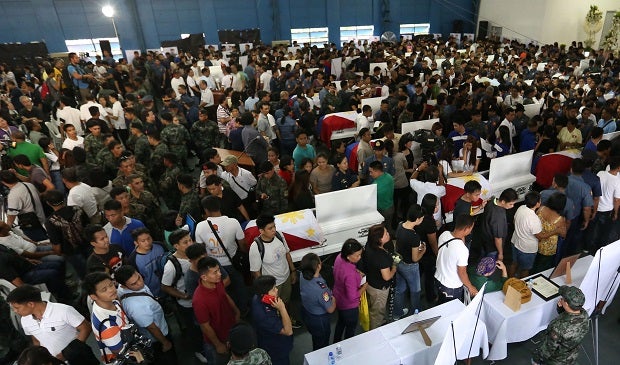 The 42 bodies of the SAF 44 commandos inside the Camp Bagong Diwa multi-purpose hall. JOAN BONDOC

MANILA, Philippines—Europe on Friday called for a transparent investigation into the Jan. 25 deadly clash in Mamapasano, Maguindanao province, saying this would help restore public trust in the Mindanao peace process.

The 44 police commandos were killed after a law enforcement operation was executed targeting Malaysian bomb expert Zulkifli bin Hir, alias “Marwan.” DNA testing by the US Federal Bureau of Investigation indicated that he was also killed in the incident.

“In the last three years, the Mindanao peace process has brought about increased hope and optimism for future security and prosperity. However, this event has reminded us that this cannot be taken for granted and that violence can still erupt unexpectedly,” the EU statement said.

“A full and transparent investigation will contribute to the reestablishment of confidence by the public in the process,” the EU statement said.

“The EU, a member of the International Monitoring Team, and the EU Member States are convinced that a negotiated political settlement in Mindanao remains all the more necessary to achieve a long-lasting peace in the Southern Philippines,” the EU statement said.

President Benigno Aquino III has tasked a board of inquiry to look into the incident that has led to the bickering between the PNP and the Armed Forces of the Philippines over the lack of coordination in the operations against a high-value target like Marwan.

The Senate and the House of Representatives are also launching their separate inquiries next week.