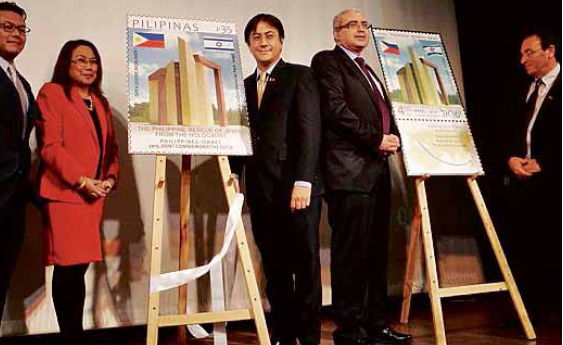 MANILA, Philippines–A joint commemorative stamp marking the Philippine rescue of Jews during the Holocaust was launched on Jan. 29 in an event that reaffirmed the enduring friendly relations of the Philippines and Israel.

The launch, held at the Community Hall of Rishon LeZion, came two days after the International Holocaust Memorial Day on Jan. 27, a significant event for all Jews around the world.

The joint commemorative stamp features the national flags of the two states and the Open Doors Monument. The monument, which was unveiled on June 21, 2009, at Holocaust Memorial Park in Rishon LeZion, honors the humanitarian act of President Manuel L. Quezon in saving the lives of Jews fleeing the Holocaust from 1939 to 1942 through the issuance of around 10,000 visas. Only about 1,300 Jews reached the Philippines.

Imperial said the humanitarian act not only saved the lives of a large number of Jews and their succeeding generations but was also a critical element in the strengthening of Philippines-Israel political relations.

During the ceremony, an excerpt of the documentary film “Rescue in the Philippines” was shown to the guests. The documentary tells the story of the efforts of President Quezon, US High Commissioner Paul McNutt, the five Frieder brothers, and Army Col. Dwight Eisenhower in helping European Jews fleeing the Holocaust to immigrate to the Philippines.